ATHENS, GA--One reason we had such a good turnout at the Furman screening last night wasthe CLP requirement. Another was the FU.net flusher (click on this for bigger image):

I'm so relieved my movie is being marketed in this way! Although I do think there’s something wrong with my own messaging when someone uses their free hand to slash Hillary and Barack's faces and Apparition of the Eternal Church is left unscathed. After the show, officers of the Furman Independent Film Society took me to the Oliver Garden—a first! 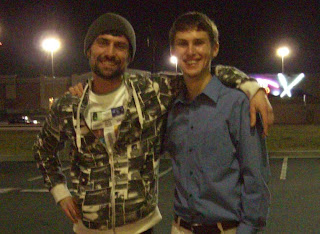 My South Carolina premiere is followed
by my first time at the Oliver Garden. Here I am in
the parking lot with Furman Independent Film Society
artistic director and hospitality czar Jeff Heinzl
Breakfast was at the Waffle House. The signage was so getto that I was sure I had chosen a local favorite, but I wasn’t ten minutes in my cream-colored PT Cruiser (the gayest car in South Carolina and George combined!) when I saw another, and then another, and soon I realized that I had breakfasted at the iHOP of the south.

I took the scenic route--it’s actually called that on the map, the Cherokee Foothills Scenic Highway--and took one or two detours to sightsee and urinate. The scenery was very pretty, though surely only a glimmer of the green spectacle that’s coming in a few months. 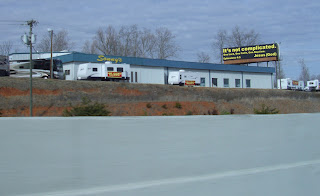 Before the Cherokee Foothills Scenic Highway, actually--a billboard in or near Spartanburg, which reads, "It's not complicated. One Lord. One Faith. One Baptism. God (Jesus). Ephesians 4:5." It does spiritual battle with the billboard for the Penthouse strip club just down the road. According to my hosts, the strip club burned, mysteriously, after a court ruled that Christian activists couldn't post patrons' license plates to the Internet. The strip club rebuilt and took the opportunity to expand, God love 'em. 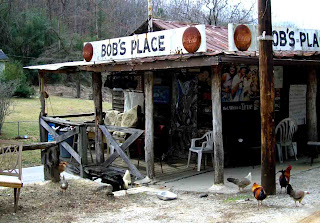 The sign on Bob's Place said open, but there was nobody there but these chickens. 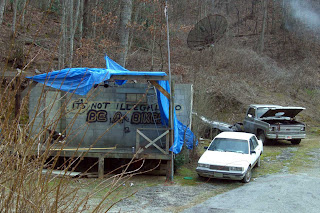 It's not illegal to be a biker--yet.
I spun around the Athens loop a few times, but finally found my way to Hill Street where a friend of Laura Kissel--MacDowell sister and the guardian angel of my Southern Circuit experience, since she told me to apply--is putting me up in a guest apartment. I spoke on the phone to my host, who is out of town, and she gave me directions to downtown and the combo to the bike parked outside the apartment, which were all that I lacked for perfect happiness. After lugging my things upstairs and briefly checking my email over the unsecured wireless (now that is what I call southern hospitality) I was rolling through a balmy Georgia winter night toward the university and downtown and a fabulous costume/kitsch shop called the Junkman’s Daughter’s Brother, where I found the perfect complements (mirrored helmet and feather boa) to my Mardi Gras drag (mirrored codpiece and fly-eye goggles), and then a Thai restaurant where I had first-rate masaman chicken curry while I puzzled through an Italian reporter’s questions ("8. Descartes asserted in his famous aphorism: 'Cogito ergo sum' (I think then I am), personally I think that it was substituted for first by Coito ergo sum (I have sex then I am) and after, during our contemporary times by the aphorism I apparel then I am. Therefore sex, primary explication of joy of life and communication with the other by the body, became just only an instrument for mirroring to the self, a soliloquy. Is it that a sign of the supreme and unhappy growing of the contemporary narcissistic loneliness of individuals?") I couldn’t be happier in this cute little apartment in a sleepy college town, alone with my work and well fed, with not even a hint of tinnitus ringing in my ears or anxiety about tomorrow’s tasks. I do have a massive amount of work to do correcting Oh My God so that I have books waiting for me when I get home from tour.

But before I turn to that I have to confess this guilty pleasure—I love driving. I don’t do it much, I’m too seized with horror and guilt over what’s happening to the ice—but when I have to drive these long distances, it is such a great pleasure, so great to not be wired, not be typing, daydreaming more than thinking, and catching ideas and putting them into my new M-Audio Microtrack II, which I got so that I could record my Q&A sessions and possibly turn them into a radio essay, but at least to work on my act. Naturally I didn’t turn it on properly last night, but I did record the interview portion of the movie and that is amusing, possibly worth posting to the Website, since it was such a responsive audience. And on the drive I made a dozen audio notes about how to promote the movie, how to fix the novel, what to add to Oh My God. None of my notes are useful on the subject of how to stop procrastinating and start doing that work. Now it's ten past one in the morning.