Thanks to this guy, I had to buy my own paper and pencil in 3rd grade.
I was in third grade when California voters approved Prop. 13, which slashed property taxes and sent California's public schools from national eminence down to the very bottom. Prop. 13 is still on the books, and so it falls to municipalities to try to improve public education.

This in from Vice President Plack:

Please email everyone you know in SF who votes and ask them to vote yes on Prop A. We are very close to the margin between victory and defeat. Every vote counts. This will be a low turn out election. You can help get us over the top.

The initiative will impose a modest parcel tax on property owners in San Francisco to aid teachers, for whom living in our superultraexpensive city is a serious challenge.

In a nutshell (from the Prop A site) -

Proposition A is a $198 annual tax per parcel. The funds raised will be primarily for teacher recruitment, retention and training. In addition, Proposition A will help our schools upgrade and replace old technologies.

Note that we need a two-thirds majority for this one to pass. Please make sure to vote on Tuesday, June 3rd, vote yes on A, and make sure you spread the word to other San Francisco voters how important this is.

The white tennies and bald spot in the clip art I can live with,
but what on earth is that thing hanging from the doorknob?
To celebrate my birthday, I filed this Nerve story on the joys of becoming a middle-aged gay man. To read, click the picture.
By paulfesta at 9:20 PM No comments: 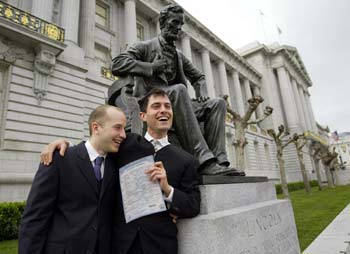 James and I are celebrating today's decision by the California Supreme Court establishing a constitutional right for couples to marry regardless of sex.

And now this, from the AP:

The challenge for gay rights advocates, however, is not over.

A coalition of religious and social conservative groups is attempting to put a measure on the November ballot that would enshrine laws banning gay marriage in the state constitution.

The Secretary of State is expected to rule by the end of June whether the sponsors gathered enough signatures to qualify the marriage amendment, similar to ones enacted in 26 other states.

If voters pass the measure in November, it would overrule the court decision.

Folks, well into my third year of unemployment, I'm in a much better position to receive money than to give it. But the prospect of California's voters overturning this decision is sufficiently hideous that I've committed $20 per month through November to Equality California, which has led the charge in support of equal marriage rights in the state. 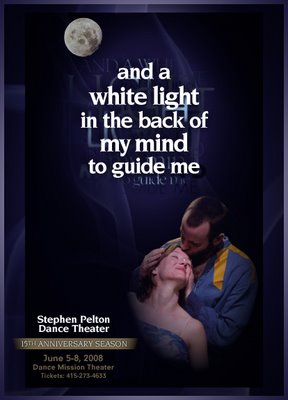 I've seen much of the work that's going to be presented - including the title piece - and it's really gorgeous. (My contribution to the evening is brief - the program ends with a piece set to the fast movement of Ravel's sonata for violin and cello.) 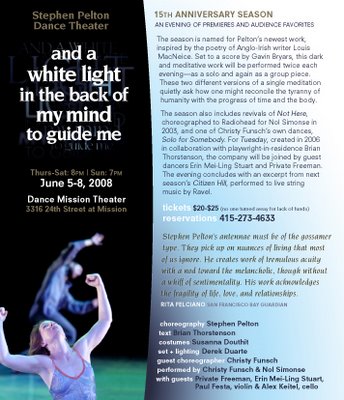 Look, they fit in a two-seater.
When it comes to distinguishing comparative and superlative, the newspapers are tied with the bloggers and the candidates themselves for not caring about the needs of ordinary grammarians.

Two candidates are running for the Democratic nomination. Between them, there can be a stronger candidate. Not this, from Adam Nagourney and Marjorie Connelly of The New York Times:

Still, the survey suggested that Mr. Obama, of Illinois, had lost much or all of the once-commanding lead he had held over Mrs. Clinton, of New York, among Democratic voters on the question of which of them would be the strongest candidate against Mr. McCain, of Arizona.

It bears repetition that the Times is not alone in perpetuating this superlative solecism. The sparklingly well spoken Obama himself - who, to his political peril, makes a point of pronouncing Taliban "Taleebahn" - does it routinely.

One more bitch about the Times: as usual, the links to the reporter's bylines are to lists of their stories, something only a paper with a rich self-regard and ignorance of readers' needs would think to provide in a medium where it is standard practice to hyperlink authors names with email addresses. The link for Adam Nagourney at least gets you to a second link to a form with which to email him, but it warns that the message will be delayed.

When I was a reporter for News.com, every reporter's byline had a mailto: link. I frequently got email from readers that helped me clarify if not correct the posted story in very short order or alerted me to related story ideas. The Times doesn't cotton to this element of "interactivity," a longstanding symptom of its illness-at-ease on the Internet.
By paulfesta at 8:52 AM No comments: