Liz Taylor and the genius of Jason Mecier

In honor of Elizabeth Taylor, Paul Festa's Archive Fever posts a few days early this week with five portraits of her by San Francisco collage artist Jason Mecier. By way of introduction, I've pulled from the archive the note I wrote in Portraits and Installations, a catalogue of original and commissioned work I self-published in 2002.

Jason Mecier, a self-described mosaic portrait artist, is best known for his virtuoso bean and noodle collages. My first commissions to him were three 1960s divas, Maria Callas, Jackie O in sunglasses and scarf, and Elizabeth Taylor as Cleopatra, to be done in beans and noodles (the corn was a welcome surprise; it was years before I discovered the lemon pits).

The obsession with Jackie, Liz and Maria, I must confess, is not mine. It is borrowed from a Yale professor of mine, the poet and essayist Wayne Koestenbaum, whose artistic sensibility with reference to popular culture had, it seemed to me, a great affinity with Jason's. The commissioning of this triptych came as a way of introducing the two artists--in the virtual, artistic realm--to see what Jason would do with the images and icons that Wayne so trenchantly and fancifully analyzed in his books "Jackie Under My Skin" and "The Queen's Throat: Opera, Homosexuality and the Mystery of Desire."

Jason may be known for his bean-and-noodle collages, but many of his best pieces more closely match the materials to the subject matter. There is Tammy Faye Bakker out of fingernails and nail polish, Demi Moore in G.I. Jane out of dog food (her left tit doubles as a doorbell), Jerry Seinfeld out of breakfast cereal, Martha Stewart out of cold cuts. Over the course of three years, I have commissioned the quartet of mosaics picturing Liz Taylor as Martha in Mike Nichols's movie adaptation of Edward Albee's play "Who's Afraid of Virginia Woolf?" The thematically inspired materials are broken booze bottles and cigarette butts. Look for the rubbing alcohol label in the fourth mosaic (Despair), and the pregnancy warning label in the third ("Now how do you like it?"). Also note, in the background of the third one, the figure of George Segal as Nick trying to restrain Martha.

A few years ago, before a screening of Apparition of the Eternal Church in New York, I had to monitor a transfer to tape of the movie in a film festival office. The festival directors were amazed, they told me later, to see me sitting there absorbed in the film, laughing at the jokes, forgetting to breathe. "Most filmmakers," they said, "can't stand to watch their own films."
A few dozen screenings later I haven't exactly joined the ranks of most filmmakers--I still enjoy Apparition. But what I really enjoy is taking pictures of it, which is how I spent much of Thursday's organ rehearsal in Santa Cruz before the screening there. I came home with an iPhone full of these images and was inspired to dig through the photo archive for similar images from prior screenings, mostly from the 2008 Messiaen centenary tour. Here are some highlights:

Portrait of the violinist as a yink

Violinists grow up playing a lot of garbage. At the dinner table they force-feed you brussels sprouts, but twelve-year-old violinists are playing Vieuxtemps and Wieniawski, Paganini if they can hack it - musical junk food! - and it's supposed to be good for them. I'm not the only one to invoke a food-related metaphor for this sort of music: Juliette, following Stuart Canin's performance of Saint-Saëns's Introduction and Rondo Capriccioso, called it Violin Vomit.
The first decent music a student violinist is generally permitted to get his or her hands on is the Mendelssohn Concerto. Here is my performance of it with the Symphony of the Redwoods - October 30th, 1994 (Juliette is first stand cello, inside, with the black headscarf) with Allan Pollack conducting the orchestra at the Mendocino County Fairgrounds in Boonville, California - home of Boontling and setting of Eisa Davis's play Bulrusher. Doesn't my performance of this as a yink make you want to bow for me?

Coast to coast, Santa Cruz to Chicago, and Nicole Kidman

Paul Festa at UCSC - Apparition of the Eternal Church from Paul Festa on Vimeo.
Ten days from now UC Santa Cruz will present my films Apparition of the Eternal Church and The Glitter Emergency, both with live musical accompaniment (Gianni Staiano accompanying Apparition on organ, me accompanying Glitter on violin). In honor of the occasion, I pull from the archive the above Q&A done in July at Santa Cruz when HisCon PhD candidate Logan Walker screened a double-header of Apparition and Glitter for his class Film 20A: The Film Experience. James had just given me an iPhone for my birthday and this is the first video I took with it, balancing it on a chair in the corner of the room. I also took these pix of Logan before and after the show, and of the class, which impressed and charmed the hell out of me.

Coincidentally, Apparition of the Eternal Church also got some press today - this doesn't happen every day to a five-year-old film. The interview explains how I connected with the site, Biblioklept, but it doesn't tell how I came up with that screwball photograph - that's explained in this email:


Edwin you should use whatever picture you like - I've attached two you probably haven't seen - the first is a still from a home movie and is the first known documentation of me directing a film. The second I took yesterday with Photo Booth as an audition picture ("Imposing faces are a plus!") for extra work on a new Nicole Kidman picture they're shooting in Oakland. They wanted something taken with a Webcam or cell phone and rejected this one as looking too much like a professional head shot. Isn't technology marvelous?"

Regular readers of Paul Festa's Archive Fever are familiar with the first photo I mentioned:
Today I went to the set of Hemingway and Gellhorn and did not see Nicole Kidman, but en route from getting fitted with scratchy wool pants and a Spanish Civil War gun belt to acquiring a soldier's haircut on the production's dime I saw something that made my directorial mouth water more than any starlet could:
I leave you with the latest poster for Apparition and Glitter in Santa Cruz Thursday March 17th, along with a Save-The-Dave for Chicagoans: The Chicago International Movies & Music Festival will open with The Glitter Emergency before showing a Kenneth Anger double-header and then The Passion of Joan of Arc (1928) - all four films with live musical accompaniment. 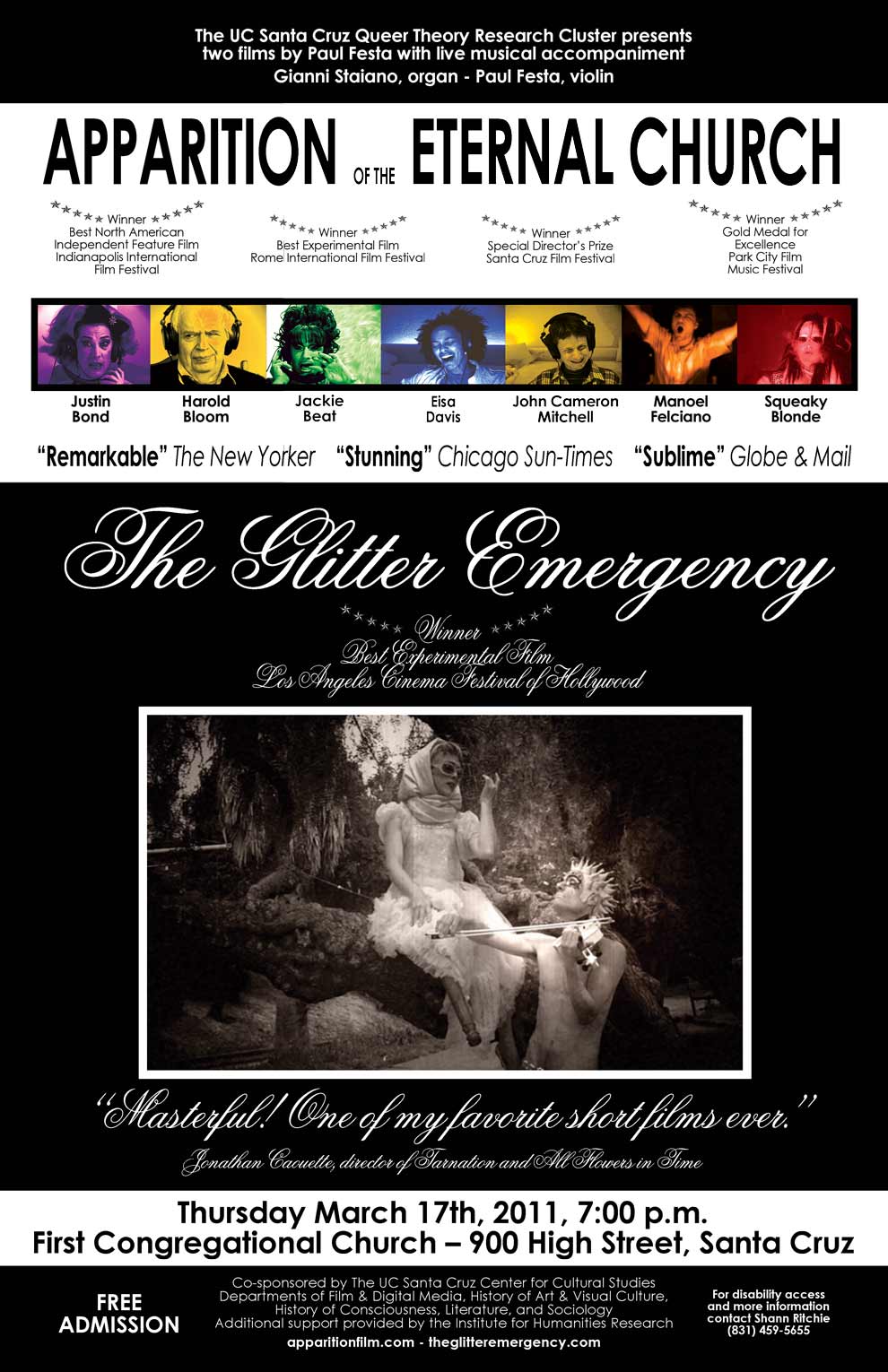 California residents: Save sharks, save the oceans - support AB 376 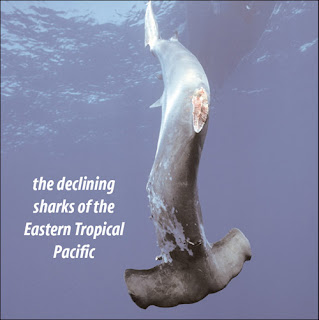 The Times has a story in today's paper about the Assembly bill to help protect live sharks from having their fins cut off before they're thrown back to die in the water. This practice isn't only cruel, it's threatening the species and the health of ocean ecosystems worldwide, and it's growing as the Chinese middle class swells and demand for shark fin soup rises.


The bill, supported by a consensus of environmentalists, scientists and animal advocates, is cosponsored by Assemblymember Paul Fong (D-Cupertino), which should lend at least some comfort and cover to those of us concerned about the multicultural issues this legislation treads on.


Opposed to the legislation is Senator Leland Yee, who would like to become San Francisco's next mayor. In my email to him (find him here senator.yee@senate.ca.gov and here Leland@LelandYee.com), I suggest that the prospects of running for that post from an anti-environmental, pro-animal cruelty posture will be precarious.


More about what you can do to help the sharks here:
http://www.sharksavers.org/en/blogs/722-support-needed-california-shark-fin-bill.html


I urge you to reconsider your stand on AB 376. I recognize the importance of the issue to the Chinese-American community, but the environmental and animal-cruelty issues here are too grave to ignore.


I am sure I don't stand alone in saying that this issue will be determinative in deciding whom to support in future elections. There isn't that much that differentiates candidates in my native city of San Francisco, but environmental and animal-cruelty issues are so emotional they will flip a vote in a heartbeat.

Apparition and Glitter at UCSC - draft poster for your feedback

Here's the draft poster for the March 17th screening of Apparition of the Eternal Church and The Glitter Emergency in Santa Cruz. Both films are screening with live music. This is a draft, so feedback is welcome through Monday, March 7th. The poster itself will be 11x17 so the small type and crazy font will be more legible. 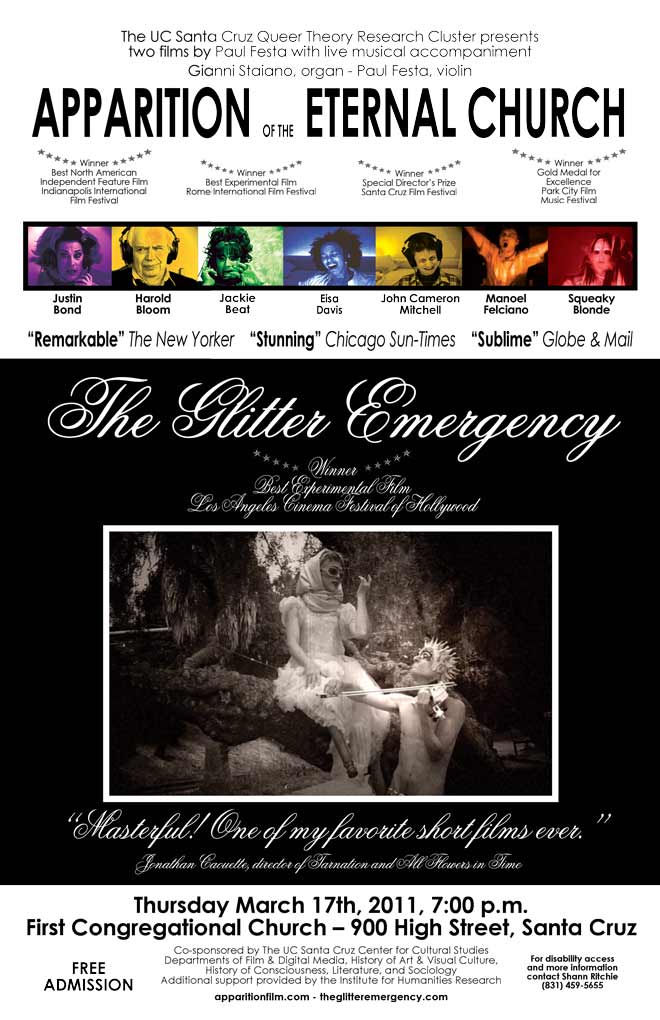