When you fly to Israel from San Francisco, they typically make you cool your heels at JFK for five hours. This makes no sense. Stay a week! So I did, and used the same argument to justify ten days in Paris on the way home. I'm getting three cities for barely more than the carbon emissions of one. The paradox of unemployment is that you have the time for this sort of scheduling, but not the money. Bewilderingly, I'm still considered housebroken by a handful of gullible New Yorkers so I don't have to pay for lodgings.

On Wednesday we landed around 4:30 in the afternoon, we being me and the harmonium my sister is having me bring to Israel. This musical instrument is just petite enough to fit in the overhead bins and though I can't play it, I am never unaware of its charisma. Some of my favorite chamber music from the 19th century are the five bagatelles Dvorak wrote for harmonium, two violins and cello (this recording is the one I know and love) and I heard them in my head the entire fifteen minutes I was conscious on the plane.

By the time I got my checked luggage and got the witchy little eastern european organ to Martin's place on the fourth Brooklyn L train stop and then took the 2 up to 135th St. and Malcolm X Blvd, it was precisely eight o'clock, which was when the memorial for Janet McDonald was scheduled to end. Dinner afterward allowed me to catch up with friends and be seated at a table of powerdykes in publishing whose gossip about Hillary and Condi was spicier than the Louisiana hot sauce that stained our deep-fried catfish.

Several of us piled into a gypsy cab to head downtown and in the East Village I met Stephen Pelton and his lover Ben. The bar was fronted by a wall of corrugated obscured glass and inside homosexuals were drinking rosé. Good to catch up with Stephen especially since he has cancelled his plans to be in Paris when I'm there. Of course I'm taking it personally. After we left the bar a pungent odor, like that of a burning weed, made its presence known on 1st Avenue and shortly thereafter Stephen and Ben called it a night. I walked downtown to The Cock, and was moments away from arriving there when Kevin Hoskins, a.k.a. Downey, and Apparition of the Eternal Church contributor Ned Stresen-Reuter came out of the bar. I fell in with them and with their charming friend Tyler, who's destined for a PhD program in architecture at the New College, so clearly our paths will cross again. We went to a succession of bars and Kevin entranced me with his brilliance and his idea for a Rudy Giuliani fundraiser: "9/11 in July." Tyler gave me a ride back to Brooklyn and let me kiss him despite turning down my invitation for a 4 a.m. beer. Excuse me, I thought it was beer o'clock. It occurred to me as I fell asleep on Martin's airbed that since arriving in New York that late afternoon I had caught up with three circles of friends. At home in San Francisco I'm not even sure I have three circles of friends.

Thursday Stephen Pelton and Jim Roe and I met at Lincoln Center after Jim's rehearsal at the State Theater, where he's playing in the ballet pit a lot these days. Gone are his Broadway pit days, when he played the whole of Elton John's Aida, six times a week, from muscle memory with plugs in his ears and the Atlantic Monthly on his music stand. We got sandwiches on Broadway and took them under a tree in the Sheep Meadow, where children roughly the age of my Israeli nieces and nephews were trying to pull a fat low bough down on us. I wanted Jim and Stephen to meet because they remind me so much of one another, particularly in their goofy staccato cackle. But you know how those expectations can sabotage an introduction, and the full lunch hour elapsed without a single instance of cackling.

Jim and I went back to the State Theater after lunch and he let me see the theater from the pit, a first. I love that theater! It's glitzy and romantic and I saw Moses & Aron and Busoni's Faust there. Good times, good times, and how often do you say that about Schoenberg? I was awestruck, an aged Eve Harrington looking up at the theater from the pit, but Jim should not worry--his oboe is safe from me. The most thrilling part of my afternoon in and near Lincoln Center was seeing the Juilliard School with its face ripped off. I mean no disrespect to my alma mater. Like everybody else who went there I had a love-hate relationship with the school, and much of the hate was directed at the spectacularly oppressive brutality of its architecture. A little glass, a realignment with Broadway, and a better attitude should improve the situation dramatically.

Jim and I hung out at Albert's place for a while. Albert had gone to Newark that morning, en route to celebrate Hugues Cuenod's one hundred and fifth birthday in Switzerland, but had returned to West 67th Street when he realized he had left his briefcase (tickets, passport) at home. We decided it was for the best because it meant he was free to have dinner with me, so after falling asleep in the Ramble in Central Park for an hour I returned to Albert's bar to watch the news at 6 and then spend the next five hours lighting Albert's various cigarettes and talking various blue streaks. Jim was getting a Helicon Foundation mailing out so he wasn't able to join us until we were finishing dinner at Nick & Tony's down the street.

After wheeling Albert home I walked to Hell's Kitchen where I met up with Julian DeLeon, whom I met in San Francisco as he was on his way to New York to dance with Stephen Petronio. He and I had expensive cocktails at an overly designed bar and then repaired to his tenement, where I have spent much of the last few days marvelling at its doorways, which are all deeply skewed parallelograms.

Friday I killed some hours with Julian wandering around that liminal area between Flatiron and Union Square and the West Village and Chelsea. At the Strand I had a mild anxiety attack sitting among all the Jesus books. I became certain that I was responsible for reading all of them before I write another word of my novel, and so I didn't buy any of them. I also put down what looked like a crucially relevant book by a Nobel laureate about the physical underpinnings of memory.
Nol Simonse, who played Oren, boyfriend of my Jeb in the Stephen Pelton Dance Theater spring workshop "The Hill," met us at the Strand and we went for excellent falafel on 14th Street. I kept saying I was going to head back to Williamsburg but I never made it, just frittered away time with modern dancers until it was time to meet Manoel at the Public Theater. How thrilling to see a friend who has gotten so chubby on purpose. I wrote down the numbers somewhere but I think he went from 155 to 192 and is back down to 185. He gained the weight for a Todd Solondz flick but then Emma Thompson pulled out and now the studio has hired a trainer whom Mano had to meet in Central Park this morning at 9AM so he can resume life as the skinny heartthrob with which he gained his legions of disorderly young female fans.

Mano and I ate a tiny Japanese dinner and then saw Eisa play the mother in Passing Strange at the Public. It was my second time, Mano's third. Mano and I talked each other's ears off about the play all night, but the only salient point is that Eisa is a dazzling performer and so was every other person onstage, including Stew in his too-cool-for-school way. After the show, Eisa, Mano, the absurdly good-looking Chad Goodridge (see pic below of the Passing Strange cast minus Eisa--he's at center) and I went to Cafe Orlin and had surprisingly good food. Mano left early because he had to get up early and lose weight. 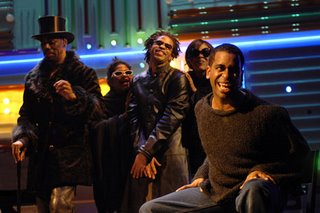 I spent the rest of the night with my dissolute modern dancers, ending up on a rooftop with beers. Two pieces of good news worth recording: Mano roped Eisa into a play he's producing and I'll be here for the preliminary performances Monday and Tuesday. And Eisa was nominated for the Pulitzer Prize.