My movie Apparition of the Eternal Church is playing at the Boston University Messiaen Project international conference "Messiaen the Theologian." It's part of their three-year observance of Messiaen's 100th in 2008.

I spent most of the day working on this variation of the New York premiere poster and the DVD cover art. It will also appear on t-shirts for sale after the show, because documentary filmmakers gotta eat. I'm looking forward to the screening, after which I have 22 hours in which to get nervous about giving the Fantaisie premiere. The Fantaisie (1933) is one of only three pieces that Messiaen wrote for violin and piano, and that's including the single movement from the Quartet for the End of Time. There's no recording of the Fantaisie. So I'm guessing that even in a group of Messiaen scholars, the vast majority of the audience will never have heard the piece. 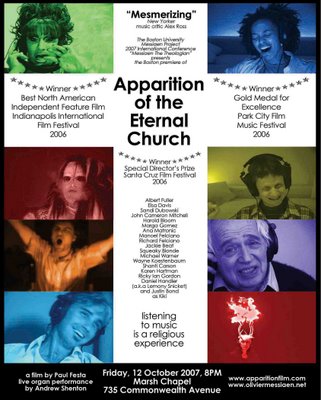