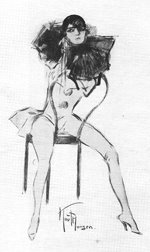 My friend Susan Waterfall - brilliant pianist - is presenting an evening of "Degenerate Art" - music, film and photos from Weimar. I'm very sorry to be out of town for this, which was a hit at this summer's Mendocino Music Festival. The details, from Susan:

After World War I, Weimar Berlin was a cauldron of artistic ferment as avant-garde artists and intellectuals, most of them Jewish, struggled to create a modern German culture. Exuberant freedom and hectic experimentation masked a sense of impending doom. After 1933, Hitler denounced them all as “degenerate” and their forced exile carried Weimar modernity to the rest of the world. The evening includes Joris Ivens’ twelve minute 1929 art film, "Rain," with an extraordinary score by Eisler, cabaret songs of Weill and Schoenberg, Weill’s String Quartet, and pieces from Three Penny Opera.

Presented in association with the Goethe-Institut San Francisco and the Mendocino Music Festival.