Nancy Pelosi should watch her back 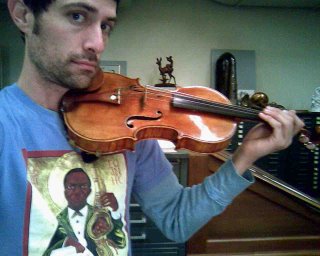 Me, St. John Coltrane and the "Betts" chillin in the Flute Vault

On Saturday, the day after Apparition of the Eternal Church had its Washington DC premiere at the Library of Congress's Pickford Theater, I gave my DC recital debut, with pianist Jerome Lowenthal, in the LOC's Coolidge Auditorium playing the 1704 "Betts" Stradivarius. Not just performing on this instrument but practicing on it the three days prior was a peak experience of my life.

The day I showed up in Washington on the $20 Chinatown bus from New York, LOC instrument curator Carol Lynn Bamford met me on the steps of the library, across the street from the Capitol, and brought me into the room where the Betts lives, behind glass, with the "Brookings" Amati, the "Kreisler" Guarnerius del Gesu, and the "Castelbarco" Stradivarius cello and violin. Some kind of meeting taking place in the room was on a break as we took the two Strads and the del Gesu out of captivity and put them in cases - it's unclear to me that the assembled suits understood what they were clearing their briefcases and coffee cups for as we laid out the cases and put the instruments away. I was reminded, with a shiver, of the time my Juilliard teacher Robert Mann spilled a cup of coffee on his Strad - an event I was grateful not to have witnessed.

Carol Lynn and I took the violins to the Coolidge Auditorium, a uniquely resonant jewelbox chamber music hall, and she listened to me play passages from my all-Messiaen program on each of the three for most of an hour. By the end of our time in the Coolidge, my gut feeling was to go with the Betts, a feeling Carol Lynn seconded from out in the hall. I didn't make up my mind until the next day, at our next meeting, in the LOC flute vault, when I played the Betts against the del Gesu and the Amati, but not the Library's Stroviols: 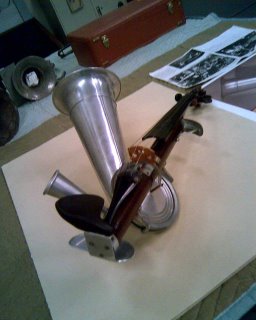 The Amati was a gorgeous instrument, with the famed dark Amati sound, but with enormous power not usually associated with those violins. But it was turning down Fritz Kreisler's Guarnerius that was truly surreal. Setting aside its legendary provenance and its gutsy, throaty sound, the violin spoke in the lower positions as though plucked on an amplified harpsichord - the lowest notes on the D string, often hazy and hard to articulate on even excellent violins, popped on this del Gesu with the consonant clarity of an Italian heroine scorned. I might have spent another hour considering the Kreisler but both Carol Lynn and the visiting luthier, John Montgomery of Raleigh, NC, warned me that my sound was distinctly uneven between the lower and higher registers - a problem that had escaped me under my ear.

So, with the feeling of someone who'd just been forced to choose between going to bed with Prince, Beck and the young Frank Sinatra, I put two national treasures back in their cases and commenced a torrid three-day affair with the third. 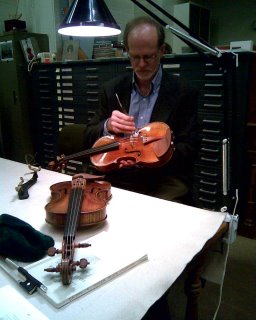 John the Luthier adjusting the "Betts" soundpost. B-flat above middle C on the G string - an important note in Messiaen's Louange a l'Immortalite de Jesus - was wolfing and he nailed it on the second try. The Kreisler del Gesu is in the foreground.
There's no way for me to convey, without libeling my own beloved violin, what it was like to play the Betts Stradivarius. The closest analogy - apart from that liaison with the 20-year-old Rudolf Valentino - is to having played the electric guitar your whole life and suddenly having it plugged it into an amp for the first time. Look - I've played a number of old Italian violins in my life, among them a few Strads and del Gesus, including another that belonged to Kreisler (in the Colburn Collection, in Beverly Hills). But the Betts bests them all. It's in a class by itself. I am spoiled for life.

This is why I have decided to run for Congress.
By paulfesta at 6:33 PM

Scribble, I am truly in awe. What a fantastic experience!!

Lots of love from Philly,
~turtle~