In our second week the water in the creek rose several inches. It wasn't exactly a rill when we got here, but shallow enough to scrape my ass the one time I went down in an inner tube. The source is the reservoir up the road toward Buffalo, and I picture someone turning a faucet to let the river rise, or tipping a vast cruet another few degrees. I have swum in the river since the adjustment but I haven't crossed it to climb Snake Hill and hike the Thousand Acres on the other side. The others do this routinely but I can't get myself up there. My mornings are devoted to work, as are my 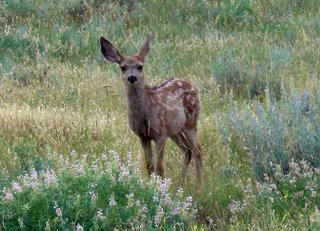 mid-days, which are too hot for a hike. At sunset, I'm on my bicycle, scouting for porcupines and antelope fauns, like the one I got pretty close to on yesterday's ride. His mother bolted as I crested the hill, but he just trotted perfunctorily down the road a few paces, as though he understood the procedure but hadn't learned to panic. When I got too close he wiggled under the cattle fence and then we stood and regarded each other while I took his picture. When he lost interest and turned away, I called to him and he looked back at me. What? That's what he's saying in the picture.

Still I haven't gotten up Snake Hill. You could put the hiking boots on my feet and an alpenstock in my hand, give me the trail map and I would just find my way back to my studio to stare at the novel. I just stare at it sometimes, outraged that it's not finished. I've worked seven hours a day fourteen days in a row here in Wyoming, and those hours don't count dicking around with my email and blog or even researching things for the book; they don't count looking up words from somebody else's superior vocabulary or reading The Gospel According to Thomas, though I could easily count that as research (why else would I be reading about somebody else's lord and savior?). It does count the systematic murder of dozens if not now hundreds of box elder bugs with the writer's studio Dustbuster. I shudder to think what that thing will look like when it's emptied. Maybe one of the artists should be given first crack at it. Two of them collect animal carcasses from the side of the road and around the property. The latest find was a rattlesnake, run over by a car. Probably the same one we saw as we were leaving to catch closing night of The Laramie Project, put on by some college and high school kids in Sheridan. The snake seemed a little listless as Mike hoisted it with a long stick and moved it away from the house, and the creature's rattle was a few degrees askew. Even those of us who are accustomed to rattlers were excited to see this three-foot yellow beauty, a theophany of sorts, to come so close to a creature with power over life and death. Now he's dead and broken, in our freezer, awaiting his next incarnation. A drawing? Ankle boots? Lunch?

Adam saw a couple of golden eagles but everyone seems most jealous of my porcupine sightings. I saw a second one coming home from last night's bike ride, a black poof waddling across the road. I thought it might be a badger because he was so much blacker than the other one. I accelerated and got just close enough to make out his departing quills. Commoved by the noise of my tires in the gravel, he hustled up the hill and out of sight.
By paulfesta at 1:40 PM