Is the artist retreat a kind of harem? We laze around in luxury, preparing our offering of bliss for whomever is on the other side of the purdah. We know that not everyone's offering will be accepted, at least not all at once (barring a spectacular party), but by virtue of being in the group we feel chosen, and burdened. I am burdened by bug bites, including one itchy bleb on my right wrist from my trip to the pond last week when I crushed a mosquito just after penetration. He left something behind--maybe more than one thing. West Nile is in the area, I saw a headline. 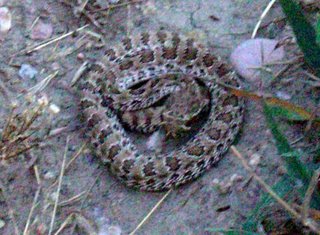 Worse things than bugs can bite you--take this baby rattlesnake Kristen and I saw on our way up Snake Hill to the Thousand Acres. He might have been six inches long, thin as a child's pinkie, his black rattle more cirrate than segmented. He slithered away from us on our way up the hill and was waiting, coiled (but not rattling) on our way down. The babies are scary because they discharge all their venom--most adult bites, according to Lynn, are actually dry. Lynn also described shooting a snake clean in half and watching the snake continue to strike. Kristen almost stepped on this one. We also saw two screech owls. 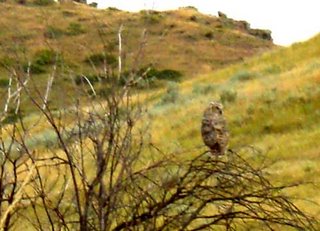 Speaking of the wildlife (which is all I seem able to speak of after getting in trouble for my now expurgated New York blog with a person or persons who was/were unhappy to discover him- or her- or theirselves written about), I have been misidentifying mule deer as antelope. I figured this out after swimming in the lake with Jessica, when we pulled over to look at some truly bizarre looking animals and realized they were anteope--white underbellies and rear ends, faces that look like African tribal masks (don't tell me it's the other way around, I'm not that gullible). The confusion stem in part from the fact that there are two types of deer in this valley, white-tail and mule, and very few antelope compared to the fields along the highway, where they're common. The confusion also stems in part from the fact that I'm a clueless city boy.

Now I'm desperate to see that antelope herd again. Is there a jacklight that works for these exotic creatures? I was thinking of creating a little mojo hand out of found animal parts--a feather, a porcupine quill, a bone from that virtually intact bleached ribcage on the side of Highway 14. Probably a mule deer's.

I do know what horses look like and there are some beauties in this valley. 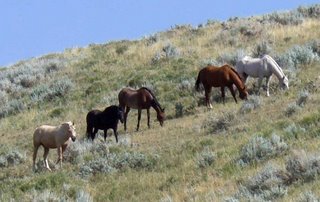