It doesn't seem just antiquated but willfully perverse that to find out what's going on at the Rodeo today I am asked to call an actual person. Earlier today I was looking for a print shop in Sheridan where I could have the novel printed so as to have something to show for myself when James comes to get me tomorrow night. I found the Web site for Sheridan Quick Print, whose contact page reads:

Quick Printing is a family owned and operated Print Shop that has been serving the Sheridan Wyoming area for 70 years. Established in 1938, QP serves all of northeastern Wyoming. Thanks to the wonders of modern technology, QP can upload any file electronically, print your documents and mail the finished product to your door.

The wonders of modern technology notwithstanding, the contact page lists only a phone number and a snail mail address. You cannot email these people. My interest in the rodeo is abstract--the Sheridan County Fair wore me out. You may be wondering, as I am, how any of this relates to my vocabulary exercise. How the hell am I going to work the word "homburg" into this anemic discursion on northern Great Plains cultural practices and communication technologies? The word as described seems awfully close to fedora, though the homburg is supposed to be more sharply rolled on the brim and lacks a pinch somewhere. Rodeo, rodeo--maybe I was hoping for a connection with cowboy hats.

WTF? I thought you could go ten miles over the limit and get away with it (which I was NOT doing when I hit that deer, Mom, so relax). I love that "From the Bench" is in the "Diversions" section. There is a refreshing honesty about journalism in that.

Math question: Shirley is going from Point A to Point B at 87 mph in a 75 mph zone. Dick is going from Point C to Point D at 83 mph in a 65 mph zone. If Dick's ticket is $26 cheaper than Shirley's, how much did Dick save per mile per billable hour expressed in terms of Halliburton's tax savings if the vice president gets his corporate welfare provisions passed?

What, no fine for skiing in August? 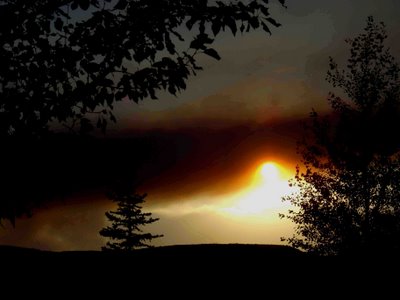 Sun setting through Little Goose Canyon fire
Big Horn's biggest since '96 -- 200 acres burned by Friday afternoon
as seen from the Jentel driveway
I'm sure I had a way of working in the word "fence," as in a receiver and seller of stolen goods.
I'm sure I have no idea what it was. Oh yeah--I was hoping "From the Bench" would provide some thieves. Maybe I'll have better luck with "Rolling Log" (also in Diversions):

Officers responded to a fight call.
Ministerial aid was provided with a room for the night.
A sick squirrel was reported at local business.
Officer found a dog at large on West Brock Street.
Officer responded to a local business where a 3 year-old girl had collapsed and was having seizure-like symptoms.
An adult male was arrested for entering a motel room without permission. He was charged with criminal trespass.
Officer was asked to talk to a rude subject at the city pool.
A noise complaint was received.
Officer assisted EMS with an intoxicated 71 year-old male that had fallen and cut his head.
...
A man was yelling and punching holes in a door at a local motel, officer arrived and arrested the individual for property destruction and breach of peace.
Person reported that an RV pulled into their lot and pulled a tree branch off of the RV and dumped it into their lot and left. Subject was contacted and information obtained. Subject returned and cleaned up the mess.
A man called to report someone had tied a black Pomeranian dog to his truck. Officer retrieved the dog and transported it to the animal shelter.
A transient was reported asking patrons for money. Officer arrived and advised him to stop. Subject headed for the Interstate.
Person reported that a dog was getting into garbage in the 700 block of Klondike.
...
Officer picked up a gray tiger-striped cat.
Business reported a gas drive-off.
Officer talked to a kid playing in a cardboard box on the street in front of a business.
Officer observed a group of youngsters running away from a parking lot. One subject was arrested for minor in possession of alcohol.
A dog was hit by a vehicle and the reporting person asked if the city could possibly put a speed limit sign back up.
Person complaied (sic) about five dogs chasing him when he left on his bike.
Officer picked up a friendly black, white and tan cat and took it to the shelter.
Traffic control was provided for the trike parade.
Person reported someone stole a fanny pack with a camera in it from a motel lot.

Do local authorities have the goods on the Sheridan County camera-in-fanny-pack fence?

...
Person reported someone was bleeding and covered in blood and asking for a ride. Officers responded and patrolled the area but subject could not be located.
...
A noise complaint was received that sounded like a fight. A large group of people were having fun but since it was after 2 a.m. they were advised to stop making so much noise.
...
An accident involving a car and a deer resulted in the car receiving a hole in the gas tank.
...
A complaint of horses being neglected was received.
...
Assisted EMS with a person who fell off a horse.
A family member requested a welfare check on his father. Everything was fine and officer advised man to call family member who requested the check.
A caller reported a civil dispute.
...
Person reported picking up a sick hitch hiker and wanted an officer to show him how to get to the hospital when he arrived in Buffalo. Deputy led person to the hospital.
Officer picked up a bike and placed it in the storage area.
A large snake was reported. Officer collected the snake and released it in the country.

It's probably not premature to judge this idea of combining local news and my vocabulary exercise a total failure. One would think that in the above catalogue of human frailty I could find a use for the word "atavism," but the items are so gnomic and irreducible that I can't even comment on them in my own inferior vocabulary. Atavism is a word I know but periodically forget, and the act of forgetting, reverting to a prior state of ignorance, is inherently atavistic, come to think of it, so now I'm off the hook.

Now what words are staring me down? Several that were not in the OED: "tocking," "flaques," "thrillhound," "snik." Perhaps somebody with a superior vocabulary is making shit up. Sombebody is entitled, but I'm getting impatient, because in very few words I'll be done with Canto One of the Rhapsody and it can't happen quickly enough.

My Faerie name is Scribble (no relation to the DJ), and I'm a fan of word games, so I feel I should know "scrabble" which is sometimes used as its rough synonym. The OED has three separate entries for scrabble, one of them referring to the board game, and that's not including "scrabblement," which describes perfectly this fiasco of a blog entry ("Writing of a rambling character like that of a madman." Don't try using it in Scrabble, it's Obs.).

So "scrabble: A scrawling character in writing, hence, a document composed of such characters. Also, a picture composed of or characterized by hastily executed line work." In the US it's also "a scramble; a confused struggle, a 'free-for-all'" and, as a verb, "to make marks at random; to write in a rambling or scrawling characters; to scrawl, scribble." See? But my vocabulary idol uses it to mean "of an animal: to scratch about hurriedly with the claws or paws; hence, of a person, to scratch or scrape about with the hands or feet" and "of a person, to scramble on hands and feet; to stumble or struggle along." And I think that's why I don't like the word, because I wish they'd just say scramble. Actually, the idol uses it to mean "to scratch or rake (something) up, off, out, etc. hurriedly; to obtain by scratching or raking about." I'm still not in love with this word.

Now I can sense the robins and lawn bunnies outside cheering me on toward the scribblative finish line. But every word resists use--we're in Wyoming and at nearly six in the evening it's too friggin hot to wear anything made of twill. I've enjoyed parts of this canto, but this home stretch has been a downright plutonian experience. Perhaps it's the heat and my refusal to turn on the AC, which I imagine as tantamount to focusing the sun through a magnifying glass the size of Wyoming on the polar ice caps and its starving, drowning bears. What is it with the fabrics? There are no tartans here either. This isn't the conclusion of the canto, but its truncheon. In one entry I've followed the trajectory of my residency here: from enthusiasm and dedication to burnout and apathy in an afternoon.

G-d bless my vocabularian, the final word isn't in the OED. I'm apparently not the only person wondering what the hell it means and suspecting it's Yiddish for a big wallop (Mom, did your parents ever threaten you with one of these?). I had just begun that sentence when I noticed a box elder bug on my foot. I took the first novel of my vocabulary idol and zetz the end of that glorified cockroach.
By paulfesta at 1:45 PM