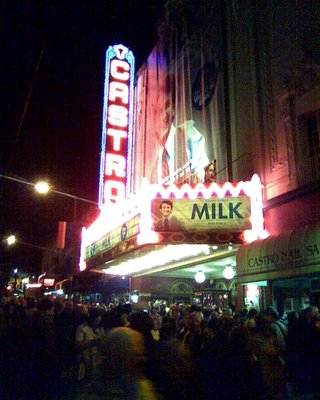 The very best thing about being at tonight's commercial premiere of Gus Van Sant's Milk was the crowd and the place. There's nowhere better than the Castro Theatre to see cinematic depictions of angry gay mobs teeming outside the Castro Theatre, and nowhere better to see the premiere of a hometown film. Shouts and ovations went up for friends and acquaintances and people well known to us; a chorus of whispers when the actual Cleve Jones was spotted onscreen, a shout-out for Dennis Peron, cheers for Tom Ammiano. And no matter what the film, there is nothing like seeing a show at that theater when it is sold out. James and I miraculously got two seats together in the second row of the balcony and that, along with David Hegarty's organ playing before curtain, was worth the price of admission.

As for the mobs that teemed in front of the theater after the film (pictured above), one can only imagine the impact they might have had, multiplied around the state, had the distributors not seen fit to sit on the film until after the voters of California passed judgment on Proposition 8.

As for the film itself: Sean Penn's performance is a marvel and a force of nature. The film surrounding it is very good, and far exceeded expectations, but did not get under my skin the way it ought to have. The crowd scenes and some of the supporting actors seemed artificial, as though they belonged to a lesser production. The film gave White a fair amount of screen time, and did due diligence with respect to his multiplying stresses external and internal (mercifully leaving out the Twinkies). Still, I never believed in the character the way I believed in Penn as Milk, and that had serious consequences for the denouement and the time invested in White. I understood the editorial decision that forced a choice between the early footage of Feinstein as she announced the assassinations and including her as a character (beyond a gavel-wielding ghost at a board meeting), but I felt the sacrifice. Here was the woman who mentored White and found Milk's body - an episode whose gruesome details are well known. Perhaps it was a necessary sacrifice - I hesitate to second-guess a writer and a director who told a coherent story and brilliantly incorporated contemporary footage and elicited at least one dazzling performance in 128 swift minutes.

The soundtrack had a reasonably light touch but was otherwise foul. The sex was lighthearted, which I liked, but it was too spare - Milk may have stopped going to the baths after he won office, but still I suspect he would have hated how sexless the film was especially considering it was set on Castro Street in nineteen-seventy-fucking-eight. James brought up one important point, which was how convincingly gay Penn's portrayal was. And this is something to be really grateful for, and it's more important than the sex - that we didn't wind up with a Brokeback Harvey Milk.

I loathed the 1995 Harvey Milk opera and, as much as I enjoyed and admired this film, I wasn't swept away by it. Both suffer by comparison with the two accounts to which they are indebted - Randy Shilts's 1982 book "The Mayor of Castro Street" and Rob Epstein's 1983 Oscar-winning documentary "The Times of Harvey Milk." Someone let much of the emotional air out of the film's tires by announcing to us, before curtain, that it was a "ten-hankie" movie. I don't want to jinx Rob Epstein's documentary in the same way for those who have not seen it, but in fact it is vastly more powerful and heartbreaking than the biopic. Fortunately for us in San Francisco, it's playing at the Roxie this week. The rest of you can and should rent it.

And that reminds me of a Harvey Milk experience I wanted to blog about when it happened this summer but it got away from me - at Suppervision 2, my friend iii put together a video piece set to a remix of Milk's political will. I hadn't looked at the transcript or listened to it (in Epstein's film) for fifteen years and it took me a moment to realize what I was hearing. Already it had commanded my attention, but when I recognized it I came apart. The message is so simple, so powerful, so right: come out. It's the message that created the world around me and gave me the life that I have. And for all the utility Gus Van Sant found in that political will to tell this story, not once did it carry the emotional impact of recognizing Harvey Milk's own voice and hearing his message set to a techno beat (!) at a nightclub and seeing his words projected on a screen. Perhaps this is the root problem for the film - even wizardry like Penn's and everything else the film has to recommend it can't live up to the power of the source material that's so readily available to us.

So, yes, definitely go the Castro and see this film. But make it an equally high priority to experience the Epstein doc and the Shilts biography. As good an imitation as Milk is, it can't compete with the original. I leave you with the original:

The other aspect of the tapes is the obvious of what would happen should there be an assassination. I cannot prevent some people from feeling angry and frustrated and mad, but I hope they will take that frustration and that madness instead of demonstrating or anything of that type, I would hope that they would take the power and I would hope that five, ten, one hundred, a thousand would rise. I would like to see every gay lawyer, every gay architect come out, stand up and let the world know. That would do more to end prejudice overnight than anybody could imagine. I urge them to do that, urge them to come out. Only that way will we start to achieve our rights.

also great is amber hollibaugh's interview "The Right to Rebel" from "My Dangerous Desires," which talks about being part of the Dan White Riots that came afterwards. It's an incredibly empowering account. I can't find the relevant passage right now (I hate that most of my books are still in storage), but I think it goes something like "For once, we didn't burn down our own ghettos. We went to where the power was, and we burned that."