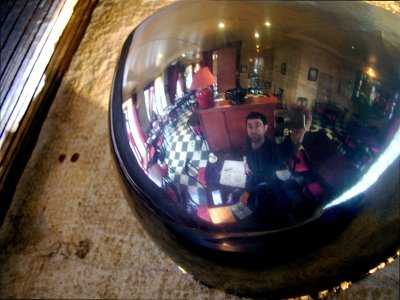 self-portrait with Tintoretto and John Ashbery

Paris penalizes "non-cultural" retail business that open their doors on Sundays so you can't do anything in Paris on the Christian sabbath except walk around and buy food. When it comes to enforcing downtime, the French are as bad as the Jews; we godless American workaholics are secretly grateful but we find a way to work anyway. Sunday is also the day the cleaning lady does the third floor of my wing of the monastery so I had to work remotely, and I had one other errand, which was to see if my bicycle was still where I'd locked it at Les Halles when I met Matt for the Malkovich "film". It was, and so I thanked my trusty post-Soviet bike lock for holding fast, or at least for bringing me good luck.

I had a terrible time finding a place to work. L'Imprevu, the coziest cafe I know in Paris or anywhere else, was closed. Cafe Beaubourg seemed too busy and stylish for me to unselfconciously spread out all my papers and stare off into space over them. Le Petit Marcel likewise, though I'm glad I stopped by because just in front I ran into my Iranian friend from the monastery and nothing makes you feel at home in a city more than chance meetings. I was on the verge of giving up and trying to find a place to work closer to home when I found Cafe Clovis, right across from Les Halles on the Rue Berger, where I had the whole upper floor to myself (see pic above).

After a day that started with early afternoon whiskey and proceeded chez Matt, Browning and Livingston through more whiskey, red wine and white port, I woke up yesterday with what the French call wood-face (gueule de bois) - a hangover. An hour after sitting down at the Cafe Clovis I had milled from the wood of my brain five joyless sentences describing a scene based on the Faerie Gathering open-mic ritual known as the No Talent Show. I felt I was doing justice to the event in every respect except humor, fun and imagination. I wrote my mother a letter and biked, numb-fingered, back to the monastery where I started the scene over and finished my writing day with a whole paragraph to show for it.

As predicted, this writing thing is turning out to be harder than that organizational and brainstorming exercise that had me in such fits of creative bliss the first three weeks here. I choose to blame it on the season. At Yale we had a winter ritual called Feb Club - a party was supposed to be held, somewhere on campus, every night of the month. I'm not proposing this as a solution - on the contrary - I'm just using the memory of Feb Club to remind myself that this is the winter of winter, that there's a reason it's the shortest month, and that I must be prepared for the next three or four weeks to be ugly, uglier than Les Halles, uglier, even, than a Franco-Hollywood essay on mortality. Midmonth my survival will be rewarded - my noisy next-door neighbors depart. But between now and then so many sentences and scenes remain to be extracted from my imaginative woods, steep woods, no chainsaws or helicopters or tractors, just the hand-saws and chains of outline, notes and second draft, and brute force.

An artist colony rejection came yesterday, somewhere I'd sent a novel excerpt. At this point I need another residency like I need another night of drinking and screwing around with a French Anglophile - too much of a good thing. But I'm reminded that for all the recognition the film has earned, the novel has failed to clear a series of comparatively low professional hurdles. The best it has done is won me half a residency - at Jentel, where I applied and was accepted for both film and fiction - and a trio of residency waiting lists. The rejections I've lost count of.

Nobody reading this should be concerned about my becoming discouraged. It is actually impossible to discourage me. I'm 38 years old, I've been earning rejection letters steadily for three quarters of that time and my keenest professional regret is that I didn't save every single last one of them - because I would have binders full of them, boxes and basements full of them, forests' worth; I could build a house out of my rejection letters and burn it down and have enough ash to wrap the hard core of my artistic self-esteem many times over. Apparition of the Eternal Church, festooned with laurels, was turned down by more than 70 film festivals. I don't know how this story ends, but I know how it can end. Albert Fuller, lecturing me on discouragement, resorted as he did so often to Latin - he forbade me to lose heart. I have not lost heart! I am just in the woods, and it is winter.
By paulfesta at 3:39 AM