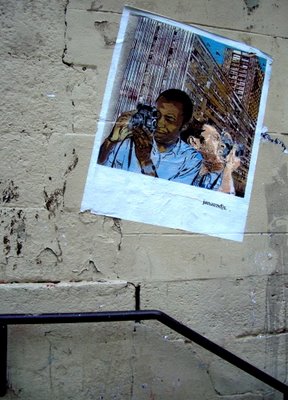 I've mentioned already how satisfying the writing process has been these weeks and months in Paris - the consolidation of the notes, the creation of a new outline, the writing, from scratch, of the new draft. This mutually reinforcing set of methodical tasks has silenced the question that disfigures creative artist and trust fund baby alike: what the hell am I doing today? I am a happy writer because I know exactly what I am supposed to be doing at any given moment, and what I'll be doing tomorrow, and even roughly where I'll be when the work comes to an end with James's arrival a month from now: done, or nearly there, with the first write-through of the third draft, 21 months after starting it in Wyoming.

In addition to not being disfigured by unstructured time, I'm also blessed with being under the impression (possibly delusional - see Tolstoy's The Sufferings and Hallucinations of the Painter Mikhailov) that Part III is good. It was the very worst of the four parts in the second draft, and three quarters through this pass, it's shaping up to be my favorite. This, after all, is the quick of the plot, the big garden, the high stakes, the summoning of furies and dispensing of fates. To conclude the novel I've prepared a second climax, which put me into such fits when it occurred to me six weeks ago, but it's extra, coda, exorcism. Part III is pandemonium itself and it had better be good. So if my hallucination holds, or if a few other readers possibly including an agent or Farrar Straus Giroux editor share it, my time here in the monastery will not have been entirely wasted.

So that's how the writing is going. The writer - not quite so well. At least for the time being I've passed through the phase, which must be common to all novelists, where you have hallucinations about your face, and have gotten to the part where you can't breathe. I mean, I can breathe, but it feels like there is a set of rubber bands around my ribcage that only lets me get so much air. It's enough to live on but you always feel oxygen-poor. Various other stress-related ailments have cropped up, but in the interest of not having to post another gruesome-content advisory, I'll leave them to your imagination.

After about ten days of rubber bands hugging my lungs, I started thinking maybe I should take more than my obligatory single day off per week, and because my Israeli friend Ofer was coming to town it seemed like an ideal weekend for two in a row. Free time started last night with drinks over at the Corona, at the Place d'Alma, with friends who work and worship at the American Cathedral, where there may be some interest in Apparition of the Eternal Church. As I wrote in my year-ender, I'm continually surprised by how much fun I have with church folk - and it might give you some idea of what sort of church folk they are to learn, as I did last night, that one is tight with Sister Roma back home.

As I left the Corona I noticed that everyone on the street had their cameras out taking pictures of the Eiffel Tower, which was sparkling the way the Hotel de Ville had been on inauguration night (and yes, I fell for the old landscape/portrait video trick, so please turn your monitor on its side to view):

The festivities continued after dinner when Ofer showed up. He brought a gift all the way from Mendocino County so we had some of that and got naked and got into bed and listened to Alison Goldfrapp and Brazilian Girls and stayed up late doing things that both help loosen respiratory rubber bands and require content advisories. Under circumstances like that I'm prone to fall in love with music and last night was no exception. The judge came over for brunch today and I made him listen to this amazing Brazilian Girls song and help me figure out the lyrics. The diary would be indebted to Martin and other francophone readers if they would make corrections and suggestions to my translation in the comments:

Make like a good little boy
if your reasons are good, come on,
take your time, and some of mine,
cause I hold it dear

Take
the speed of a hurricane
the altitude of someone who knows his heart
cause in sum it was fun
I'm more afraid...

Lie, since to know how to lie is a gift
Kiss me on the forehead then lie
lie again, mi corazón -
I forgive you

Feel
finally the sound of my words
ephemeral like time
it has recaptured you.
Listen also, it's a gift
And understand -

The lyrics are steamy enough, but when you combine them with the Piazzolaesque music and Sabina Sciubba's scantily-clad voice you have a real conflagration of a song, and piecing through it over champagne brunch with a single gay guy would seem like a really good opportunity for another content advisory. But the judge is so...judicious, and I had to wait for Ofer to get home before anything happened worthy of "Homme" (yes honey I took pictures).

Still, I have to give it up for the judge. He alone makes me stick to the half English, half French rule - he actually looks at his watch and interrupts me if give up on saying something in French five minutes before my hour is up. Today we worked on nasals and I had some questions for him. The French people are constantly mispronouncing the "in" nasal as if it were "en" or "an," for example saying "Moo-lahn Rouge" instead of "Moo-LAN [holding your nose] Rouge." This has caused me some embarrassment. Someone told me I was an "ecrivant," so for two weeks that's how I described myself in email and chat. Then I saw this street sign -

- which identifies Jean-Jacques Rousseau as an "ecrivain." Yeah, sure you're a "writing."

I became especially concerned about my nasal pronunciation in a recent conversation that turned on the word "con," cunt, which I began to suspect I wasn't differentiating sufficiently from "quand," when ("Cunt are you free for lunch?") The judge pointed out that "Homme" is full of that particular nasal sound, for example "don," gift, which I was also mispronouncing. We figured out this little mnemonic, which I'll leave here in case it's helpful to other gay men working on their French pronunciation:

Ton don est tax-deductible.
By paulfesta at 6:23 AM

I think it's a negative...in spoken French the ne tends to drop out and it makes sense here to say je n'ai plus peur....sinon, une belle traduction.....

That's a lovely song — thanks for turning me on to the BGs ;-)
Your translation is very good, except for what the anonymous poster brought up about "j'ai plus peur." In proper French that does indeed mean "I am more afraid," but if that had been the intended meaning, the singer would have pronounced the "s" in "plus" to avoid any ambiguity. (Had this been a poem meant to be read rather than heard, and had the poet actually wished to say that she was more afraid, rather than no longer afraid, she might have written "j'ai encore plus peur" if the context were unclear, and if she were writing in an informal conversational style — a pretty rare conjuncture of circumstances, n'est-ce pas?)

Regarding the transcription, the second-person singular imperative forms of "mentir," "sentir" and "comprendre" are spelled "mens," "sens" and "comprends." Also, "bon homme" should be "bonhomme" here.

Did you know that "rattraper" also means to catch up with? It's hard to decide which is the better translation — that or "recapture" — because on the one hand there's the idea of time catching up with someone, and on the other there's the cage metaphor that preceded.

In French you're not an "écrivain" until you've had a literary work published. (How one defines "literary work," and "published" is further fodder for debate, naturellement.) For Paul Valéry (literary critic, écrivain in his own right), the bar is set very high: "Un auteur, même du plus haut talent, connût-il le plus grand succès n'est pas nécessairement un 'écrivain'." ("An author, even of the highest talent, even having had the greatest success, is not necessarily an 'écrivain'.") Roland Barthes came up with the term "écrivant" to describe unpublished writers of literary work. I think the term is sometimes also used to describe producers of non-literary work. What every French speaker should agree on is that you, Paul, are an "auteur" (and not just a self-published one).

Enfin, bref: when people ask you in French what you "do," if you're not in the mood for controversy, you can just tell them "J'écris."

Now, if you'll excuse me, I have to get back in my cage and scribble out some translations.

And I am so sad that you and James can't come to the wedding, but I am consoling myself with your beautiful photos of your life in Paris.