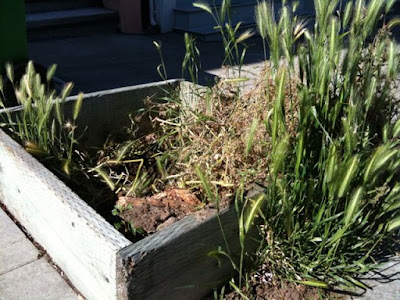 James suggested the title, following Bob Loblaw's Law Blog, and the idea was that Ziggy would narrate, following Flush, how I planted a tree in front of the house on my 40th birthday. But Ziggy's busy napping on James, who's busy reading Social Formalism: The Novel in Theory from Henry James to the Present, so I'm going to assume responsibility for the blog, as usual.
"You're really owning this 40 thing," someone said to me. Maybe making a film in eight weeks to have it ready for the birthday party was excessive, but if you're going to pull a two-month all-nighter I say do it in your 30s while you still have the energy. Anyone who had any proximity to the production knows that The Glitter Emergency took a toll on me and bystanders of varying degrees of innocence, and more than one person warned me against going immediately on vacation when it was through, mindful of Wall Street types who celebrate the first day of vacation with a nice coronary. So the film premiered on the eve of 40 and on the birthday itself, I had a project: plant a tree in the derelict planter in front of our house (see above).
After James delivered a conference paper in the morning, he and I went to lunch on Castro Street (unheard of luxury) and took a book with us: Mike Sullivan's The Trees of San Francisco. This is a great book by an old friend who's an attorney by trade and totally OCD about trees in his spare time. James and I went through the book picking out trees that seemed like a good fit for our Jacaranda-lined block, and after much deliberation decided on a Jacaranda. But when we got to the nursery, there were no Jacarandas to be had (not even for ready money) and so we settled on a Ceanothus 'ray hartman,' which blooms blue.
Glitter Emergency press in the Weekly and the Guardian had reached all the way out to Sloat Garden Center, resulting in unexpected celebrity treatment and a friends & family discount on the tree and accessories. Back home, James and Ziggy recovered from the day's exertions while I performed the following tasks: 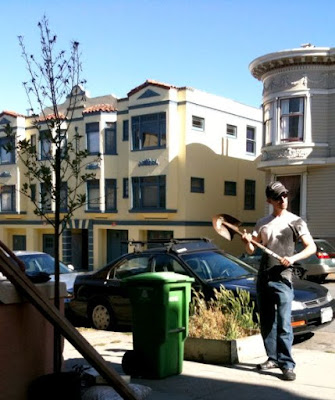 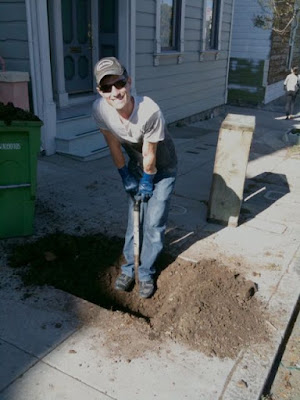 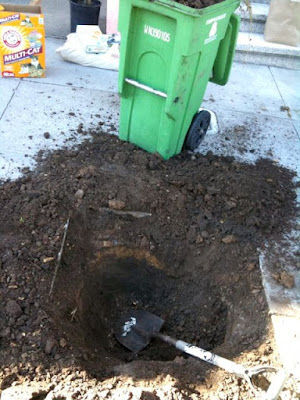 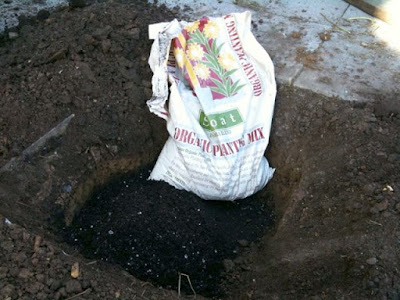 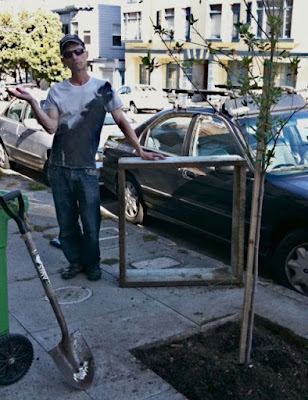 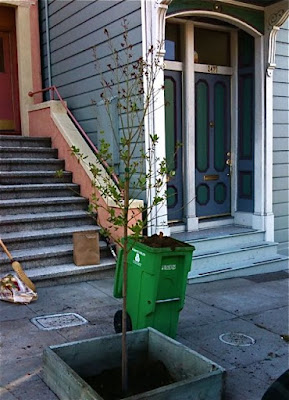 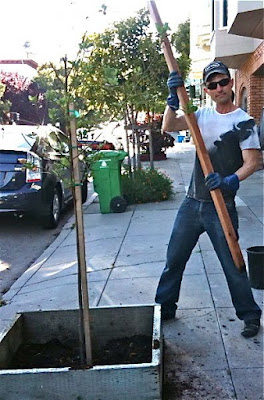 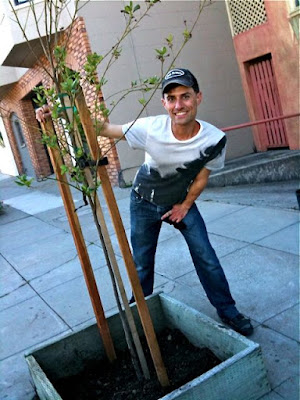 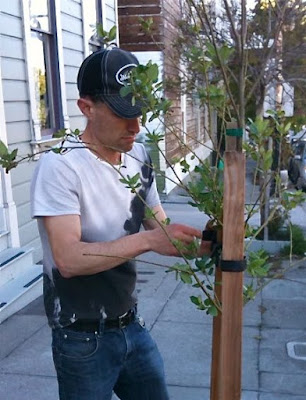 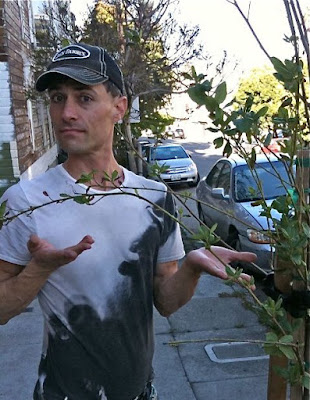 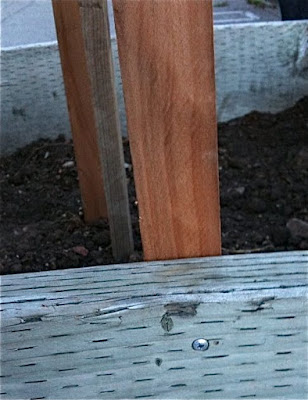 While I was planting the tree, James was making my birthday cake, and a card arrived from Mavis & Carole. It says, "one cannot have too large a party." It's a coded message - "Festa" means "party" in Italian, and they (my honorary lesbian aunts) are always telling me I'm too thin. Proof: the card came with a See's gift card. 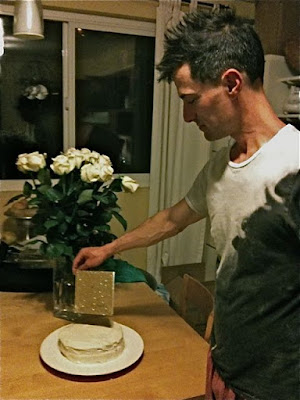 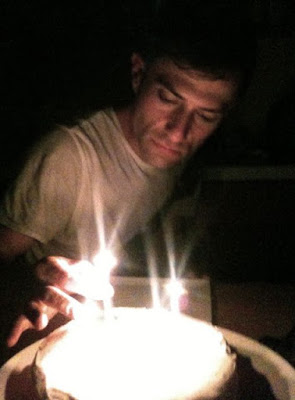 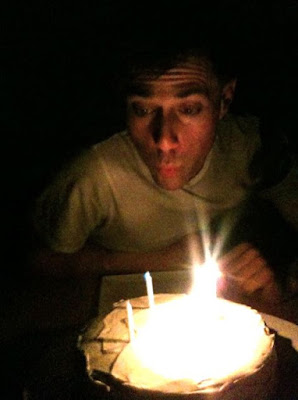 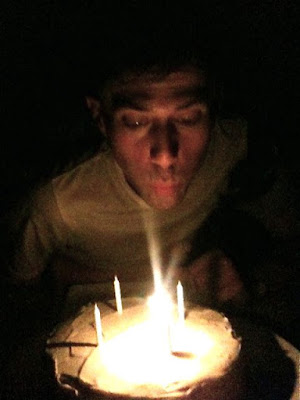 The tree one month after planting, on June 28th. The plastic containers are my elaborate drip-watering system. 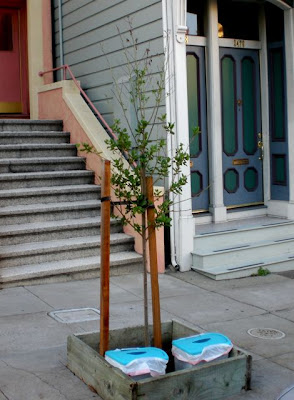 Green shoots up top where the tree had been dead a month ago: 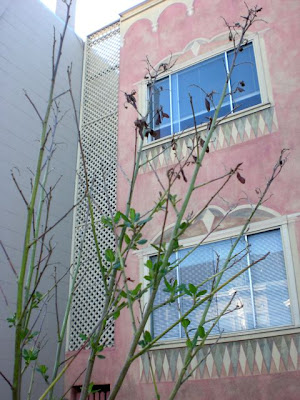 Paul: i'm used to you in photos in sequins and skin. you also look great in workin' man's clothes.

We just learned on a recent adventure from the wonderful Chris of Tree Frog Treks fame (which some local parent's might know) that the Ceanothus blossoms act like frothy soap if you rub them briskly between your palms with a little water. Chris likes to teach kids thru rhymes etc, and he encourages sharing of knowledge as a way to learn, hence 'See-I-Know-this.' And you know what? Now i know this. xo & so nice to see you last week at Eric's thingy. -susan c.

'Tis rare to find someone with as beautiful a soul as you Paul, James as well! May the new tree in front of your building, our building, thrive eternally, grow boundlessly, and reach for the stars much like your lives!