I hate to intrude on Socheata's tour, but I couldn't bear the thought of just vanishing from the blog without saying goodbye, as though some horrible disease had come and carried me off midsentence. That was only part of the problem. 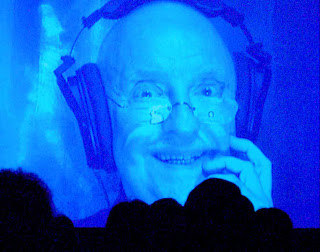 In fact, the conspiracy against my blog was joined by several agents, disease being just one of them, and if I may say so it was overkill. 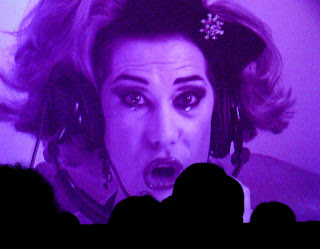 
Even if I hadn't been denied Internet access at every turn, and even if I hadn't fallen prey to a numbing demoralization and loss of will facing down my Oh My God deadline, it was certainly enough to have gotten that nasty bug that left me, from Beaufort to Orangeburg to Montgomery through New Orleans (canceling my Mardi Gras) to Baton Rouge to Palm Beach to Mobile, writhing in bed with fevers in a sea of mucus, praying, in my secular-humanist way, for death. 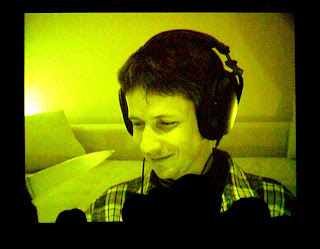 So now here I am, midway through someone else's tour, and I've just filed the final draft for the first edition of the book, and the mucus has dried up, and I'm preparing to head to New York for the screening there at St. Bart's, which will double as the book launch and triple as the New York premiere performance of Messiaen's Fantaisie for violin and piano, with my Yale and Juilliard classmate Melvin Chen tinkling the ivories. 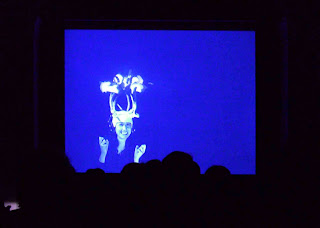 I can't express how luxurious--almost irresponsible--it feels to be blogging after the nasty, brutish and short deadline of putting that book together, conception Thanksgiving to first edition Feb. 27th. 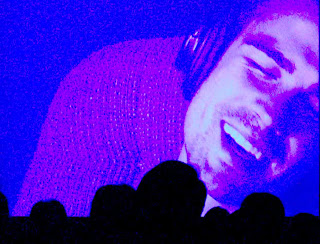 
And so I hate to waste my last Southern Circuit blog entry complaining about all the things that went wrong on my tour--they were acts of God, for the most part, and clearly she did NOT like my movie. 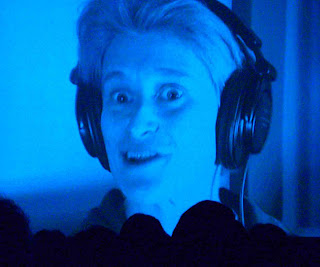 But amid the viruses and tornadoes there were incomparable moments of human error, such as scheduling my movie to coincide with both the Superbowl (Orangeburg) and Ash Wednesday (uber-Catholic Baton Rouge), and screening my movie at a South Carolina high school for 10th graders without bothering to look at it beforehand (Wayne Koestenbaum: "It also sounds--this is obscene--like being fucked by light. Fucked by light!" "OK THAT'S ENOUGH, THIS SCREENING IS OVER AND NOW WE'RE GOING TO SPEND THE REST OF THE CLASS PERIOD TALKING ABOUT CENSORSHIP."). 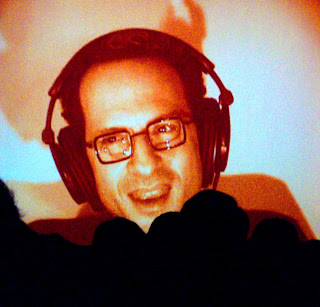 
Since I know full well you get what you pay for, should I have been surprised that there was a dead pizza in my fridge at the Montgomery airport Motel 6? And I got so much great press that it would be absolutely churlish to point out that the Mobile Vanguard chose to alternate spellings of my name between Festa and Zesta. 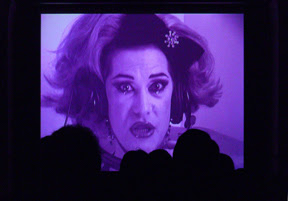 
The abovementioned conspiracy against this blog and its author had so many layers of redundancy built into it, so that before long an elaborately choreographed dance of fuck-ups began to emerge from the ruins of my Columbia happiness, and I saw that I could literally set my watch to the pace of disasters. 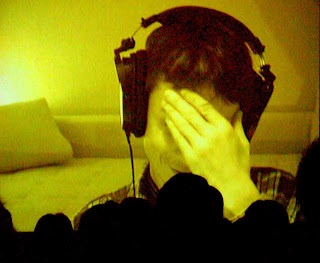 Something went wrong approximately every 12 and a half minutes. I missed my flight out of Columbia after Orangeburg. I left a Thin Man book-on-CD disc in the rental car and my computer lock on the keychain. In Montgomery, I had to rent an SUV. I continued getting hate mail from Athens. The wheel on my suitcase broke. The Motel 6 WiFi in Palm Beach was broken. The Motel 6 WiFi in Baton Rouge didn't exist. I cannot blog under these conditions! 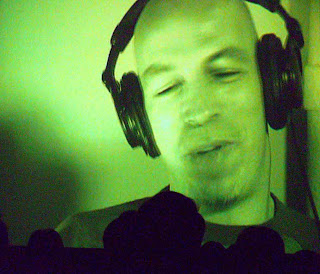 
My movie played to audiences of a dozen people. In Beaufort it played to fewer than that in the back of an office. 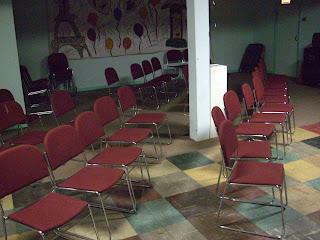 a sold-out screening of Apparition of the Eternal Church in Beaufort, SC


In Montgomery, my name on the marquee of the Art Deco Capri Theater brought in a total of 13 people. 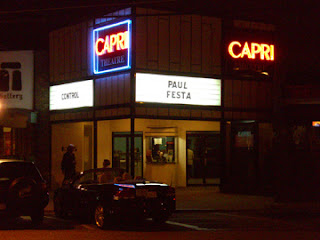 I am box office poison! 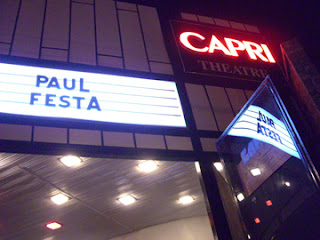 I have seen my name in lights, and it isn't pretty

In Baton Rouge, in the most beautiful modern theater I've ever seen, much less screened in, I forgot to give them the new DVD and the one they had tiled up and froze halfway through, eliciting a panic attack by the director. 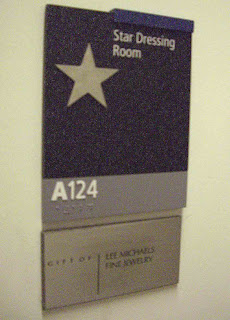 In Baton Rouge they didn't know I was box office poison and gave me a star dressing room.


In Florida the movie screened at the Palm Beach Community College to an audience of 11 undergraduates who made NOT ONE SOUND from the moment they entered the theater to the moment they fled from it. A perfectly silent Q&A, which calls into question my use of the letter Q. 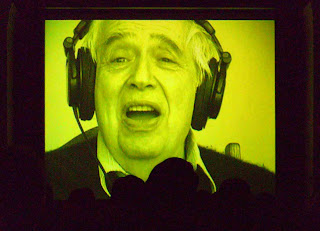 
And then--Mobile. Closing night. In a jewelbox theater at the public library, following blanket press coverage--two stories in the Mobile Press-Register and ads and write-ups in every tabloid and posters around town--a full house! 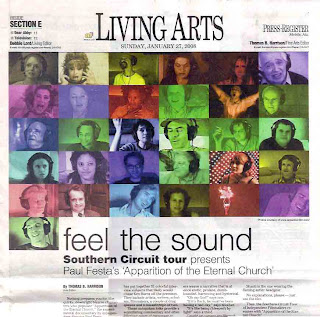 wrap that blanket press coverage around me


More people saw the film in Mobile than the rest of the tour combined--including Greenville. 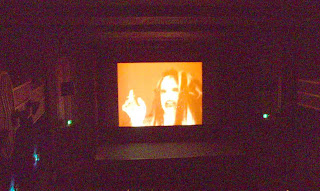 Great questions afterwards, good sales at the Bar Nothing Boutique. And then, after sushi with the delightful and miraculously competent Charlie Smoke of the Mobile Arts Council (on whose Website is posted the unedited transcript of the Mobile Press-Register interview), a celebratory Oreo McFlurry at the downtown MacDonalds and a glorious, complimentary night's rest at the Holiday Inn, with a 14th-floor view of Mobile and a bed with a 1000-thread-count sheets and a pillow menu. 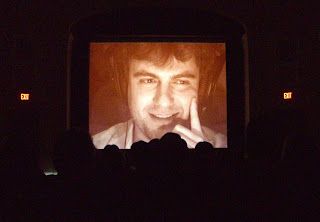 
At the Motel 6 I'm not 100 percent sure those things on the bed were pillows. And the next day, feeling like Jack Bauer speeding down the highway on a mission of harrowing consequence, I drove my PT Cruiser into the French Quarter, parked it, and staged a commando raid on the Cafe du Monde, where I slammed down a plate of beignets and a cafe au lait before I ran back to the car, returned it, and got my flight out of Louis Armstrong International with minutes to spare and powdered sugar all over my shirt. 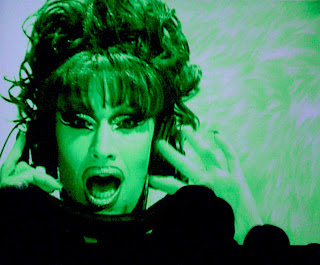