I never blog about my mom. That's so un-post-gay! Introducing Momblog, a recurring series about the woman at whose feet you can lay ultimate responsibility for all of this.

I'm especially embarrassed that I'm only now getting around to blogging about Mom since someone else managed to beat me to it. Today's inaugural entry redirects to "Civic Center: San Francisco as seen through the Civic Center neighborhood: its politics, arts and characters." Wednesday's entry concerns a protest against Governor Schwarzenegger by the United Educators of San Francisco, of which Mom is vice president. That's her, above, the angry firebrand in the pink suit.

In more official contexts than Momblog, she operates under the name Linda Plack. That's Vice President Plack to you - 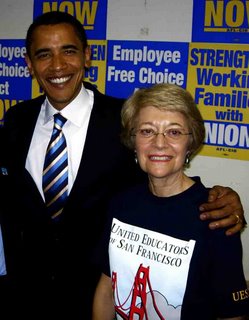