I don't normally walk Ziggy after sunset, especially when the days have lengthened to such a luxurious extent, but today was crazy what with my fiasco of an Out In the Bay interview (I was twenty-five minutes late because I biked to Daly City before I realized I missed my Persian left off Mission) and a stopped bathroom sink drain and a hurt Plantar's fascia after the 12-mile hike to and from Murietta Falls yesterday with Barry Owen, Dan Becker and Fenton Johnson, and, oh, several million other gripes that seem, frankly, minor in the light of last night's nightmare featuring a mushroom cloud in Alameda setting the bay on fire. I could have blown off Ziggy's second walk, James having given him his first in the very late afternoon after having bought a plumbing snake and fixed the bathroom sink drain himself with his bare, butch hands, and with Ziggy's fuckbuddy Grover over for a doggy-style early evening (James and I have long since exhausted our embarrassment over this torrid canine affair). But despite my hurt feet and litany of sorrows, or perhaps because of them, I decided to walk Ziggy through the gloaming to Dolores Park, where, in order to avoid a mano-a-mano soccer game, I perambulated (as I normally don't) under the klieg lights just south of the tennis courts. There I spied, in the grass and glare, the following volume: 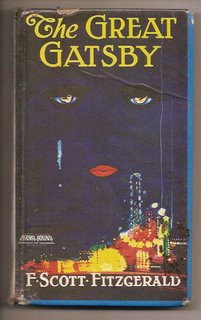 I walked past it. I'm not in the habit of picking things up in Dolores Park - they are more likely than not to have been peed on by dogs, people, or both. I make an excpetion for keys and dog tags, several sets of which I've retrieved and at least tried to return to their rightful owners (bounty so far: one bottle of mid-priced Sangiovese in exchange for a whole dog harness with tags attached, and several rings of unclaimed keys). But a few steps past the book, I thought of the poor Mission High sophomore who had dropped it, and of the grief with which he would report to English on Wednesday, and so I backtracked, and picked it up, and opened it to discern its rightful owner. And I read: 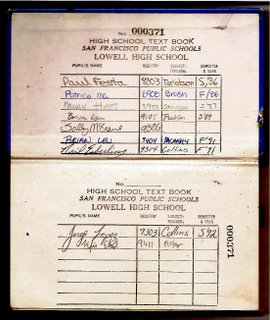 I am happy to have this book restored to me after twenty-two years. I am also anxious to inform Megan Hiatt, Daniel Handler's senior-year girlfriend, that the book is safe.

Poignantly, when I got home, a card fell out of the book, wishing Ronnie a Happy Birthday, with love from Tom, Susan, Emma and Adam. If any of the above are out there and reading this, I will buy Ronnie a new edition. I think it's still in print. Just make sure to put your name and registry in it this time.
By paulfesta at 1:07 AM