lay off the court! 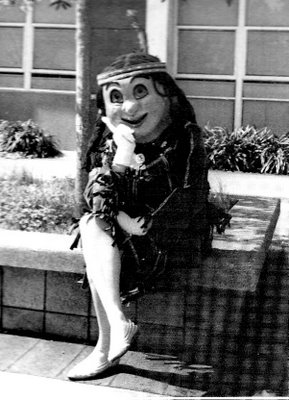 A few years after I graduated from Lowell High School in San Francisco, student activists organized a campaign against the school mascot - the Lowell Indian. They argued that the mascot and its papier maché squaw costume (above) which was trotted out at rallies and games was a racist piece of shit, and a student-body vote was organized. My majority-minority alma mater (whites made up something like a fifth to a quarter of 2700 students) elected to keep its racist piece of shit. At this point the superintendent stepped in and said it's very nice that you had your vote, but your mascot and your squaw are history anyway. Thanks for voting.
I had mixed feelings about this, as I do about yesterday's decision by the California Supreme Court upholding Prop. 8. The Lowell Indian was a nasty embarrassment and I was glad to see it go. On the other hand, what kind of democracy - or even student exercise in democracy - was this? Elections, as they say, have consequences, or ought to, and if they don't it winds up smacking of a inelegantly dressed up exercise in Soviet democracy. There's a separate question of whether California - where you need a two-thirds vote to raise a tax but can revoke state-constitutional rights by 50-plus-one - ought to be voting on people's rights at all, but once the court allowed the initiative to go on the ballot I really can't see how they could invalidate the results.
So I'm not happy with all the abuse that's being hurled at the court right now; it's the same court whose praises we were singing last year. We handed them six pounds of homophobic shit in a five-pound bag and this is the result.
The disaster came in November. When James and I received what he is now calling our "limited-edition marriage" in June 2008 (i.e. it's still valid though no more same-sex marriages can be performed), we did not accept gifts except checks made out to fight Prop. 8. Many people gave and gave generously, but the following response (by someone who gave) captured a feeling that was widespread on the left after a promising Field poll showed us way ahead and it's in large part responsible for our current situation: Prop 8 "won't pass, so don't worry.  I think people have grown up."
Fifty-two percent of the California electorate had not, by November, grown up. The President of the United States has not grown up! We have the hard work of education and persuasion ahead of us, and railing against the court isn't going to do a whole lot toward getting it done.
By paulfesta at 2:14 PM

saved by the boob. where was i? oh yes, why California's all screwed up. as everyone knows, the ballot initiatives have been instrumental in getting us here. yes, Prop 13, i'm talking about you.

i agree paul. As uncomfortable as it is, the court made pretty much the best possible ruling.

This is a fight we need to win @ the ballot box.