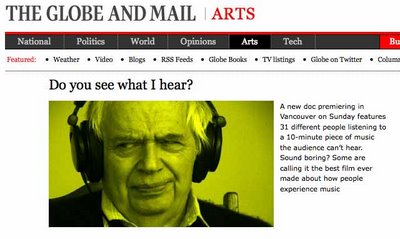 My film Apparition of the Eternal Church is having its British Columbia premiere in the coming week - Sunday, August 2 and Sunday, August 9, at the Vancity Theatre, Vancouver International Film Centre. Today's Globe and Mail - Canada's largest paper - has this write-up by Fiona Morrow. Excerpts:

This hour, watching headshots of individuals listening to music we can't hear, is entirely absorbing, moving – sublime, even. From invocations of religious imagery and howls of pain, to ecstasies of both the divine and the sexual, the immediate responses to the music are consistently hilarious, intelligent and primal.

The positive audience and critical reaction – from screenings in America and Europe, in cathedrals, concert halls and cinemas – has, he says, been overwhelming. “The reason the film is fun is, I think, the same reason that people thought it was fun to take part,” he says. “And that is because, for most of us, musical response is such an interior, hidden experience. We sit in a concert hall and we are expected to be quiet. We have to save up our emotions to the end, and the only way to express this incredibly varied experience we've had over 30 minutes or an hour, or four hours, is to shout. It's not very articulate.