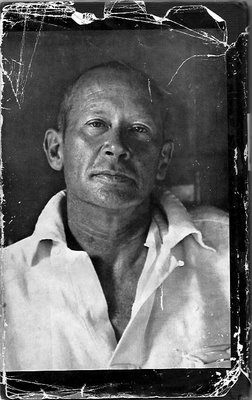 My head is spinning from all the cummings I've been reading this summer - mostly from i: six nonlectures (author photo pictured above), which in addition to its autobiographical essays collects not just his own poems but those of keats, wordsworth, shakespeare, donne, shelley, dante, rilke, chaucer, et al. My memory isn't even the cracked colander it was in my youth but I managed to commit this quatrain to memory in Cazadero:

(While you and i have lips and voices which
are for kissing and to sing with
who cares if some oneeyed son of a bitch
invents an instrument to measure Spring with?

Nevermind that I started picking up some disquieting right-wing strains in the philosophy, not to mention the anti-Science streak evidenced above that gets under my skin like cayenne - there's so much here I couldn't wait to share with specific friends (A.M.D., this means you, and B.R.O. of course) and with the blog - before I give this book back to Juliette, from whom I've borrowed it about twenty years before discovering it on my bookshelf before the Cazadero weekend, here they are:

So far as I am concerned, poetry and every other art was and is and forever will be strictly and distinctly a question of individuality. If poetry were anything - like dropping an atombomb - which anyone did, anyone could become a poet merely by doing the necessary anything; whatever that anything might or might not entail. But (as it happens) poetry is being, not doing. If you wish to follow, even at a distance, the poet's calling (and here, as always, I speak from my own totally biased and entirely personal point of view) you've got to come out of the measurable doing universe into the immeasurable house of being. I am quite aware that, wherever our socalled civilization has slithered, there's every reward and no punishment for unbeing. But if poetry is your goal, you've got to forget all about punishments and all about rewards and all about selfstyled obligations and duties and responsibilities etcetera ad infinitum and remember one thing only: that it's you - nobody else - who determine your destiny and decide your fate. Nobody else can be alive for you; nor can you be alive for anybody else. Toms can be Dicks and Dicks can be Harrys, but none of them can ever be you. There's the artist's responsibility; and the most awful responsibility on earth. If you can take it, take it - and be. If you can't, cheer up and go about other people's business; and do (or undo) till you drop.
***
As it was my miraculous fortune to have a true father and a true mother, and a home which the truth of their love made joyous, so - in reaching outward from this love and this joy - I was marvellously lucky to touch and seize a rising and striving world; a reckless world, filled with the curiosity of life herself; a vivid and violent world welcoming every challenge; a world worth hating and adoring and fighting and forgiving: in brief, a world which was a world. This inwardly immortal world of my adolescence recoils to its very roots whenever, nowadays, I see people who've been endowed with legs crawling on their chins after quote security unquote. "Security?" I marvel to myself "what is that? Something negative, undead, suspicious and suspecting; an avarice and an avoidance; a self-surrendering meanness of withdrawal; a numerable complacency and an innumerable cowardice. Who would be 'secure'? Every and any slave. No free spirit ever dreamed of 'security' - or, if he did, he laughed; and lived to shame his dream. No whole sinless sinful sleeping waking breathing human creature ever was (or could be) bought by, and sold for, 'security.' How monstrous and how feeble seems some unworld which would rather have its too than eat its cake!"

And this, with relevance to the last post (and which, loving criticism, I can't wholly believe) from Rilke:

Works of art are of an infinite loneliness and with nothing to be so little reached as with criticism. Only love can grasp and hold and fairly judge them.

A particularly crucial morning for reading precisely these words. Many thanks.

much welcome. the prose of e e c has gotten me through crucial mornings, weeks, months and years

So glad you have whole excerpts posted! I have to search around sometimes to find context of a great quote I've found. E. E. Cummings is one of my absolute favorites. I'm using him in my wedding this summer!

As it was my miraculous fortune to have a true father and a true mother, and a home which the truth of their love made joyous