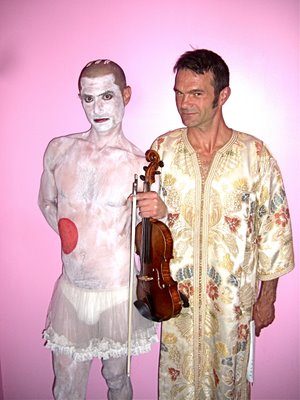 Suppervision Pride was my third and final gig this past weekend, and the only one I got any pictures from, which is a shame because I raided my middle-school classmate Eric Glaser's drag closet, and Jupiter rearranged my drag and make-up for my second show Thursday night. Where are the paparazzi when you need them? In any case the first show at Supperclub was a success - I was the first dinner-theater act in history to perform Schnittke, and the dining room went gratifyingly silent for eight minutes. The second was at Tingel Tangel where I played the same music and it was a fiasco. I knew, walking into the jampacked bar, that the Schnittke wouldn't register, but decided to muscle through. It was much worse than I'd thought, thanks to amplification ugliness and a persistent non-drug-related hallucination I had that someone was walking around the stage behind me fucking with the mikes. Oh well! The reason I muscled through was for the boot camp concentration exercise (did I really just write the words camp concentration?), and in that sense it was a success, as I got through the piece, which I'd only committed to memory that week. 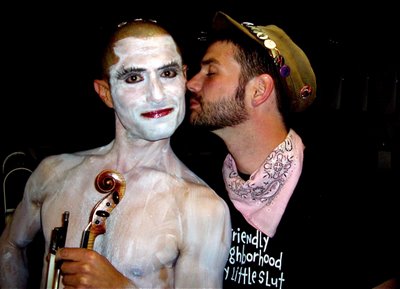 backstage at Suppervision with a friendly neighborhood little slut and $50 worth of Kryolan make-up, which I just remembered I still haven't gotten off my chin rest 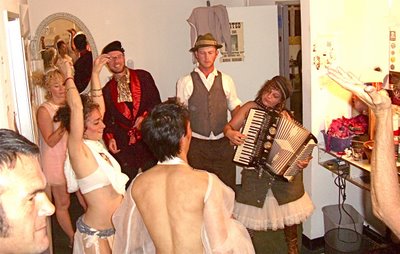 dance party in the dressing room 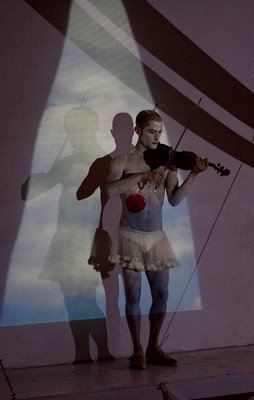 I love this picture by Tom Schmidt despite the fact that it doesn't convey the extreme precariousness of the stage. I was on a three and a half foot ledge above a 15-foot drop and was so nervous walking out at the beginning that my knees almost knocked and I let my elbow scrape the wall for support. The keyhole-shaped projection is video of clouds passing over me. Gary played piano on the stage below. 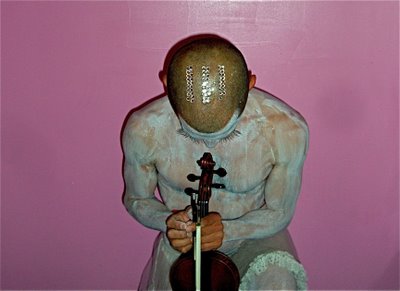