Today's sickening assassination and assassination attempt in Arizona - amid so much sickening news coming from that state - is the fruition of Sarah Palin's rhetoric of violence and should disqualify her from participation in American public life.

She targeted the victim, amid other political opponents, with gun sights in her political advertising. She urged the American right to "reload" against its adversaries. The remaining grown-ups in the Republican party and the media must end Palin's career as a mainstream public official - something that is well within their power. In the context of the American right's historical reliance on violence to achieve its political aims, Palin should be held directly accountable for this massacre.

Please repost and circulate this image: 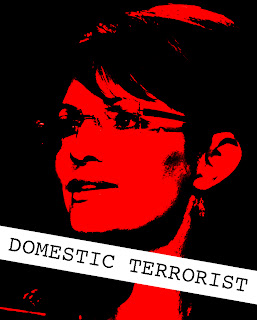 Email ThisBlogThis!Share to TwitterShare to FacebookShare to Pinterest
Labels: politics

As a kid, I always wanted to be a writer and a musician. Turns out I was terrible at both. So, I'm really glad another Paul Festa was so successful!

But I must, with respect, disagree with you on this. The "target map" has been used before, including by Democrats. Here is an article that backs me up. http://www.verumserum.com/?p=13647
Again, no matter how we disagree, I'm happy for your success! (I'm often mistaken for the "famous" Paul Festa!)

Hey Paul - great to meet you - or are you one of the Paul Festas I've already met on Facebook?

Good perspective re: the Democrats' past use of targets in political messaging. But Palin's rhetoric has been particularly and regularly irresponsible since she gained a national platform: gun sights, "reload," the whole "palling around with terrorists" canard about Obama, and failing to address or repudiate the violent and racist rhetoric she inspired at her rallies. The tenor of her vice-presidential campaign, particularly given the assassination anxiety the entire cogent minority in this country felt about candidate and later President Obama, was inexcusable. And this is part of that pattern.