Southern Circuit 5: I feel like I'm in a museum

ATHENS, GA--I was bored in my own screening tonight so I took pictures of the screen with people’s heads silhouetted at the bottom (as always, remember to click on these images for full size): 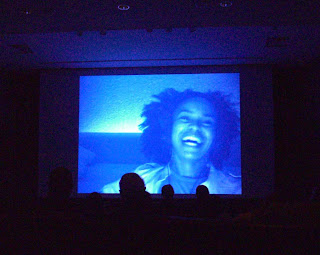 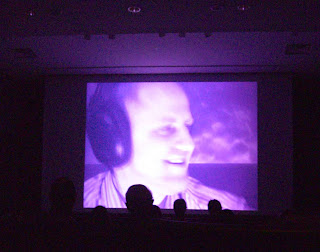 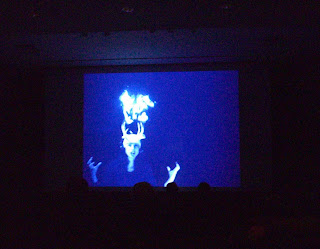 I was bored because I thought the audience was. The crowd at the M. Smith Griffith Auditorium at the Georgia Museum of Art was so reserved I wasn’t always sure they were actually there. Just shy of 40 people spread themselves out equidistantly in the 200-person theater, and I was so insecure after their display of silence, especially on the heels of the laugh-riot in the Burgiss Theater at Furman, that I actually asked them, from the stage, “Did you like the film?” Almost as though I had some baroque punch line I was building up to, like Hedwig’s routine about what poor animal hadda die so that she could wear that fur (her Aunt Trude). But I had no routine and no punch line, I only had a more than slightly pathetic question. Miraculously, in the reading, in the Q&A and in the conversations that followed afterward it seemed that most of them did like the film. They were just very, very quiet about it. Was it because they were in a museum? Maybe they were afraid if they laughed, a docent would come over and smack them. Maybe--this is a terrible thought--it was an elaborate art installation and they were in fact a representation of an audience. Oddly, the biggest laugh of the night came during the reading from Oh My God, in the part where I recall the time, after the New York premiere at St. Bartholomew's Church, when someone came up and said it was the first time he'd heard the word "blowjob" in church. "And if this film achieves nothing else..." (Note to self: Georgia audiences like blowjobs-in-church humor.) Lo and behold, after the show the Bar Nothing Boutique was down one e-book.

Southern Circuit cruise director Allen Bell has posted the podcast of the interview we did by phone a few days ago, after I’d slept two hours following an Oh My God editing all-nighter (here's a page with the MP3 file). Allen is a good interviewer, and an ace radio editor. He took a junkyard of stunned pauses, conversational U-turns, yawns and stuttering to make me sound half human, even occasionally awake. When I listened to the final product I was relieved, but then felt sheepish about my closing remarks, urging believers to come out and see the film even though it was a pack of atheists cracking jokes about their lord and savior. Why did I feel the need to pander? But sure enough, after the film, guess who made a point of coming up and saying how much they liked the film--two church choir members, a church organist, and a devout Catholic. My audience! Does the Vatican have, like, a film series?
By paulfesta at 11:27 PM