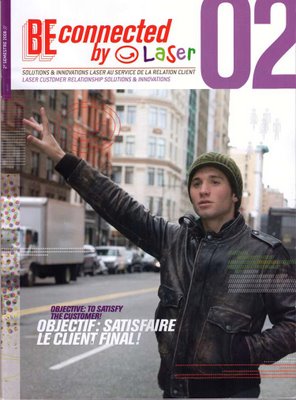 James, who for reasons which passeth understanding is pictured above on the cover of a European commercial pamphlet that Martin forwarded to us, was surprised to hear me refer to my Paris home as a monastery. I didn't really think of it that way until I looked at it from the Villemin Garden the other day, before heading down to the opera. From that perspective, doesn't it just scream monastery? 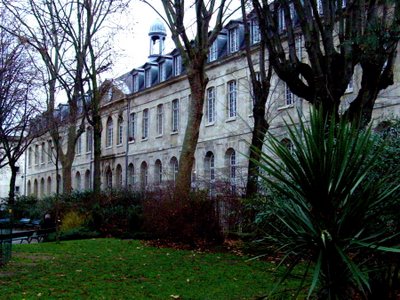 Here's another picture, from Rue des Récollets, with Velib' bikes in the foreground - my room is at the top corner, one window overlooking Rue des Recollets on the right, and the two adjacent ones facing west: 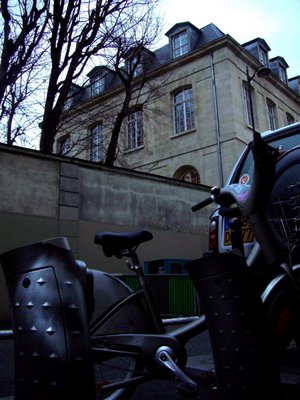 In any case I remembered that I was supposed to translate that historical marker out front: 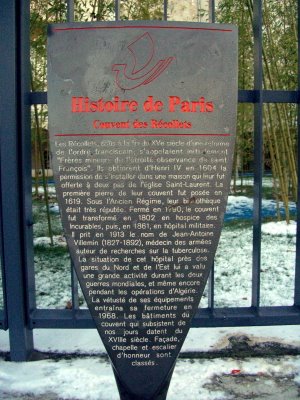 Here's a stab at it, hoping Francophone readers of this blog (Martin this means you) will tear it to pieces in the comments:

History of Paris
The Récollets monastery

The Récollets, established at the end of the 15th century from a reform of the Franciscans, was initially called “Lesser brothers of the strict observance of Saint Francis.” In 1604, they obtained from Henry IV permission to move into a building offered to them steps away from Saint-Laurent Church. The monastery’s first stone was laid in 1619. Under the Ancien Regime, their library attained a significant reputation. Closed in 1790, the monastery in 1802 was turned into a hospice for the terminally ill and then, in 1861, into a military hospital. In 1913 it took the name of Jean-Antoine Villemin (1827-1892), an army doctor and author of studies on tuberculosis. It’s location near the Gare de Nord and Gare de l’Est guaranteed the hospital a great deal of activity during the two world wars, and again during the Algerian conflict. The facility was mothballed in 1968. The monastery buildings that survive to this day date from the 18th century. The façade, the chapel and the grand staircase are particularly noteworthy.

My day was adequate. I put in my six hours on the novel, shot some video for La Creation du Monde, shopped cooked ate (discovering ultracharming corners of my neighborhood), got on top of some email correspondence, managed 45 minutes with my French textbook. I've decided tomorrow will be my day off for the week - I don't want to be one of those bosses who doesn't get that tomorrow is a planetary holiday. I have a date to meet a friend of a friend in the neighborhood, then will head down to the American Cathedral where I'm hoping to run into fellow Messianiste Peter Bannister and possibly Lucian, of brunch fame, for the inauguration on TV. Amazing to think that the smug and detestable worm will no longer be president tomorrow - equally amazing to contemplate his replacement.

I'll close with this poster I saw a couple of days ago - among other Parisian treasures, I'm collecting Beltane drag and make-up ideas. 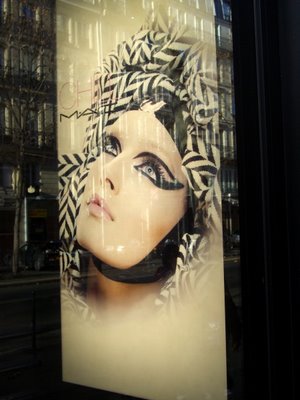 oh james is much cuter than that boy on the cover. and my motto is always, "to satisfy the customer."

Are you implying that I have to choose between James and the cover guy???