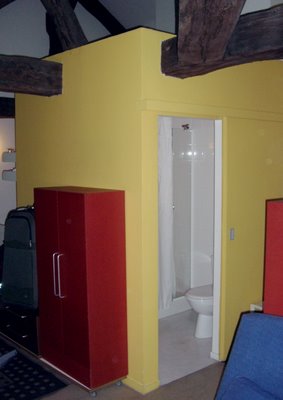 A room within a room of one's own

I’m basically holding it together with the sleep schedule but jetlag is still hard. I just finished the day’s writing with a 45 minutes session during which I lost consciousness at least a half dozen times, and the only reason I woke up at all was that I was listening to the second Schnittke violin sonata. If that piece doesn’t restore consciousness, your rest will probably be everlasting.

I am too tired to write. That sentence literally took a half hour – it took a while to discover how short it was. The day began at 4:30. Beeping sound at random intervals tormented me throughout the day – smoke alarm battery running out, impossible to locate (adjacent empty room, hidden on top of exposed beam - new vocabulary word: "bip"). Lunch: I was kidnapped by the stunning and joyous femme de ménage from the Ivory Coast, who had cooked up a feast for eight of us residents downstairs in the studio of the gorgeous Iranian writer-actor I just met today. Unbelievable food. I feel fat. I went for a walk up to Sacre Coeur and found whole blocks of discount stores with winter sales – so tempted to stock up on props for “La Creation du Monde” but I have to make this film on an even tighter budget than the dregs of Montmartre offer. Also I found a ridiculously cute Tibetan clothing store at the foot of the hill on a tourist-trap street – Tibetan cargo pants and felt dunce cap hat that would be so perfect for May Day in Tennessee. Once I collect my bourse euros on Tuesday I’ll feel less poor. Another problem – my suitcase weighed just about exactly 50 pounds on my way in here, and it had better not weigh any more on my way out. (For those of you shaking your head and wondering when I will learn to pack light, kindly take into consideration that the suitcase included a tent and mattress pad for camping in Tennesee, an HD camera, a tripod, a dozen Apparition of the Eternal Church DVDs, several pounds of novel drafts, and winter clothes - but not, for the millionth time, dental floss, which cannot be had in Paris for any price).

Milestone today in the writing, an unpleasant one: I finished reading finished material. This was unpleasant only because I enjoyed the read so much – it’s much better than I was expecting. I am abandoning my plan to jettison the third draft - the idea had been to start fresh with a radically revised fourth that chopped up the whole outline and restored only segments. I was really expecting the existing draft fragment (79,000 words, roughly the first third of the book) to be a piece of shit – in fact I was dreading this luxe Parisian residency for that reason. Now the hard part – figuring out what exists of the second draft, what my notes say scrawled on post-its and business cards and envelopes that ferried rejection letters, what guidance exists in the dozens of documents in my novel folder...the last 18 months of focusing on the movie have left this project in some disarray.

In preparation for the hard slog ahead, I rearranged the furniture, putting my writing desk in front of the southern west-facing window, retrieving a nice-looking rug from the loft area above the front door and pounding some dust out of it, hanging several lengths of string from the exposed beam on the studio's one straight wall (being the corner top unit, the mansard roof results in sloping walls on two sides – another side is taken up by that loft and a narrow passage behind the central bathroom within a room. If I were less tired, I could describe this better - see pic above). What else? Oh, that lunch – I was apprehensive about my first party in France, in French. Then most of the residents turned out to be from Argentina and Colombia, so I wound up speaking mostly Spanish, some French, and often some combination of the two. I am going to declare that the French portion of the afternoon's language exertions will count for my daily hour of study. I really am histrionically tired.
By paulfesta at 11:55 AM

I didn't want to put holes in the walls!