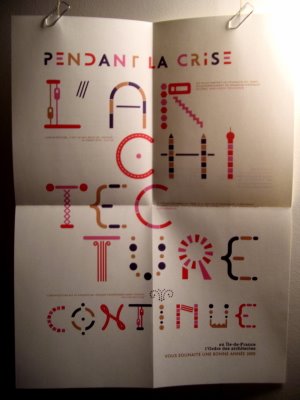 My Parisian honeymoon is apparently over. Evidence: I had to take a sleeping pill last night, not because of insomnia, but because I was so freaked out from two distinct and seriously bloody hypnagogic nightmares. After a day of biking blissfully around Paris, an old foot problem has resurrected itself. A family with what sounds like a three-year-old child has moved in next door and every footstep of this busy group creaks to rouse the dead nuns of the Récollets along with us living residents (I was actually grateful for the summons at five this morning, having taken that pill last night and being anxious to preserve my pre-dawn writing schedule, but the presence of a young child shouting and babbling on the other side of a thin wall for the next two and a half months of trying to write and to shoot video is considerably harder to envision). And after a week of blogging daily with compulsion and abandon, I posted something I shouldn’t have in last night’s blog, which was actually my second stab at a Day 8 posting - it having been a more than usually interesting day. Said posting was probably the catalyst for those nightmares and so I did something I’ve only done once or twice in my life as a blogger, which was to delete it.

I have dim expectations for this replacement posting, because most good prose but particularly the diary-blog relies on transparency and candidness and yesterday’s transgression has spooked me into being cautious and obscure. It's hardly the first time in my life as a blogger that I’ve screwed up like this – made an abrupt left turn on the high wire, special to blogging, between publishing immediacy and judiciousness (a word I hate in this context but the only one I can come up with that's vague enough to not start replicating yesterday’s foul). I’m reminded of my experiences at Burning Man, a place I felt, from my first sight of it, had been created for me: a tabula rasa of creative and social flagrancy. And while it wasn’t flagrancy that got me into trouble, it took three increasingly awful trips to the playa (debilitating nausea that followed any exposure to the dust or mud) to realize that while Black Rock City perfectly satisfied vital elements of my character, I was fundamentally unsuited to be there. I was allergic to it.

I hope the comparison to blogging doesn’t go that far, because posting these dispatches has been fun and has probably served my primary project in ways I can’t fully gauge. But it’s also sucking up a lot of time and with La Création du Monde, the City of Paris, the French language and a three-year-old next-door neighbor all competing for my attention I’m not sure if I’ll be able to sustain this as a daily discipline, especially if it persists in presenting me with ethical and strategic difficulties like Day 8's. As a record of my life, how could it do otherwise?

Blogging was so very much easier when I was in my 20s.

The poster above (“Pendant la crise, l’architecture continue”) accompanied the deleted Day 8 posting, which had me, as I waited on my bike on a Place de la Bastille traffic island, declaiming to the swirl of Parisians jetting by on their mopeds and sensible tiny European cars, Pendant la crise, le blog continue aussi. It's a much different story if la crise is of my own making.
By paulfesta at 9:18 PM