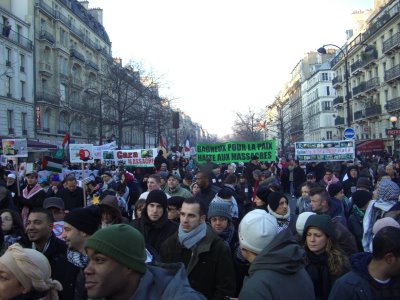 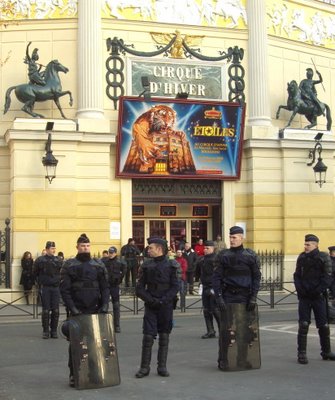 When my mother emailed me that I should stay away from the Gaza demonstrations, I couldn't quite tell how much of her concern was for my safety and how much was for my judeo-geopolitical soul. I replied that I had given myself a political pass on the Gaza situation, as I have generally on the Israel-Palestinian conflict, reasoning that my innate sympathy for the oppressed is in enough conflict with my sympathy for my Israeli sister and her six children, across the street from whom a Hezbollah rocket exploded a house two and a half short years ago, that no amount of study, debate, and moral agonizing is going to lead me to a tenable position. When it comes to all but the most obvious points (settlers), I am that creature I detest in much less consequential matters - a man without a political opinion. I am crippled by ambivalence, which is not the same thing as indifference. I think of the people crammed into Gaza whose children are being cut in half by Israeli bombs and I feel I must join the angry throngs. I think of how I would feel if Hamas rockets were landing across the street from my sister and her kids - which they don't by virtue of distance, not lack of desire - or if Mexican rockets were landing across the street from my family in California, and the overwhelming force with which I would demand that my government respond - and I cannot protest. I'm reminded of Wordsworth shorting out on the subject of French Revolution after visiting Paris:

Thus I fared,
Dragging all passions, notions, shapes of faith,
Like culprits of the bar, suspiciously
Calling the mind to establish in plain day
Her titles and her honours, now believing,
Now disbelieving, endlessly perplexed
With impulse, motive, right and wrong, the ground
Of moral obligation—what the rule,
And what the sanction—till, demanding proof,
And seeking it in every thing, I lost
All feeling of conviction, and, in fine,
Sick, wearied out with contrarieties,
Yielded up moral questions in despair,
And for my future studies, as the sole
Employment of the inquiring faculty,
Turned towards mathematics, and their clear
And solid evidence.
(The Prelude of 1805, Book 10, 894-910)

Don't worry - I'm not so far gone that I'm going to resort to math. After finishing one project that delved substantially into the intersection of spiritual ecstasy and physical violence, I'm working on much more benign territory these days and so work is a thorough enough escape from the events of the day. (I confine math to vague anxiety about what a 3-euro liter of orange juice really costs.)

But even pleasant work, and my soaring Parisian aerie, require escape and so this afternoon I took a walk and of course ran right into the Gaza protest on its seething course between Place de la République and the Bastille. All the conflicting emotions described above surged amid the angry, mostly Arab and north African crowd holding pictures of bloodied Palestinian children, chanting against Israel, against America, against Sarkozy. I walked with the mob for a while until a sense of profound disloyalty - treason, really - pushed me away.

My destination had been the Bastille and I arrived by a different route along with the heart of the protest, here seen from the steps of the opera house:

I hadn't yet run into the march when I stumbled upon this glove and broken bottle within a few feet of each other on the banks of the Canal St. Martin. 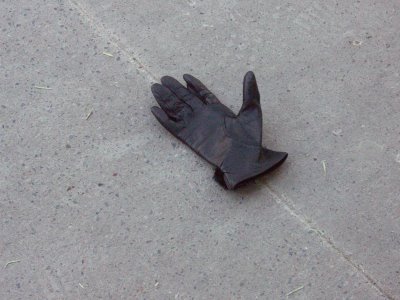 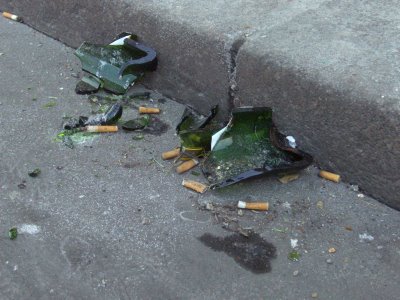