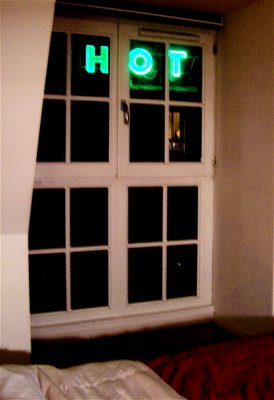 So far I seem to have gotten the upper hand in the battle with jet lag. I slept on the plane, kept myself awake until midnight last night, slept until 6:30 this morning, and only fell asleep twice today, and for less than an hour total. This is all on the strength of my excitement to be here in Paris and my consumption of two cups of Carte Noire Arôme Absolu Arabica Exclusif ("Un café nommé désir") - café soluble lyophilisé - that's Kraft Foods freeze-dried coffee crystals to you, bee-atch, and it's what you're all getting for Christmas next year. This whole American thing about grinding your own beans, and brewing your own coffee is, pardon my French, retarded. In any case, I woke up from my second nap to the neon benediction pictured above, and you can only imagine my disappointment (undoubtedly visited upon every tenant of this aerie) on approaching the window. 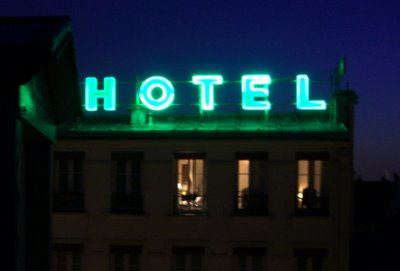 So I cultivate satisfaction in other pleasures, including some salubrious habits I'm reviving from prior residencies. I'm keeping very close tabs on how I spend my hours, and today checked off six hours of work on the novel in three sessions. The work is comparatively painless because it involves reading over the first dozen chapters, pretty settled work as this project goes - six hours of cranking out new material is something I will have to build up to. I've sworn off reading, surfing headlines, messing around on Facebook while I eat, one of my worst habits at home - I have decided that while I am in France and hopefully after I will take advantage of mealtime to eat. There is no WiFi this high up in the building and so it is very easy to unplug the Ethernet cable and not have Internet access until all my creative work is done for the day. If I keep one habit while I am here, and bring one habit back home (where James, in the same room, keeps tabs on what I'm up to by checking my Facebook status), it should be this one. Internet access at home is like a pet mouse that now has great-great-grandchildren, many thousands of them, inhabiting every part of my day, my life, my consciousness. How nice to start fresh and get that infestation under control again (the last extended periods of unwired sanity being Jentel, a month, and MacDowell, seven weeks). Kill your WiFi! I am really happy to have a cheese and salami plate that I don't refrigerate. The other amazing thing about being here, so far, is that when I step out of the premises for a walk or a shopping trip, I find myself instantaneously surrounded by Paris. I'm still trying to get a handle on the hood - today I walked down the Blvd. Strasbourg and encountered whole blocks devoted to Afro-French women's wig shops and manicurists. The Canal St. Martin is frozen over in places, though water still pours freely through the deeper locks.

On returning to the Récollets Center I scored an invitation to lunch by the residence director - there's a little cafe on the first floor and Fridays are cous cous days. I will never miss one of these meals - we are served our own individual tajine with cous cous, chicken, an oxtail, a tangy thin sausage, stewed zucchini, onion, and some reconstituted dried fruit that was somewhere between a raisin and plum in size but tarter. I ate half my food and took the rest, in its tajine, up to my room and had it for dinner - it was even better the second time. 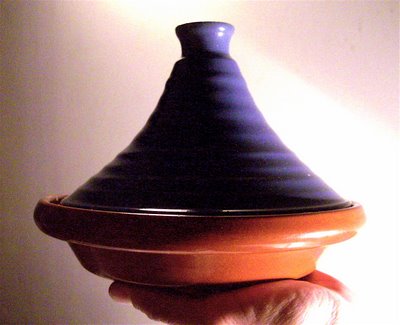 Lunch and dinner in the palm of my hand

Lunch conversation was a little disquieting - one of the incoming residents was supposed to be the Bangladeshi writer Taslima Nasreen, against whom a fistful of fatwas have been declared for such impertinences against Islam as feminism and theological dissent. The status of her arrival and residency is unclear, thanks to a story last week by Le Figaro - followed by the AP, dozens of other publications and now Paul Festa's Post-Gay Agenda - naming the Récollets Center as Nasreen's home in Paris effective Feb. 1. Don't get me wrong, I'm honored to be under the same roof as this woman, but weren't the powers that be more careful about publicizing Salman Rushdie's whereabouts? (I perpetuate the coverage with some hesitation but when Le Figaro breaks a story and the AP follows it, the cat is definitively out of the bag, and I think it's a safe bet that the neighborhood's religious extremists haven't got PFPGA bookmarked.)

You know, between a berserk passenger grounding my transatlantic flight, a fatwah'd neighbor, and my second destination transformed rather convincingly, since I bought my tickets, into a war zone, I'm going to be kissing the ground when I land in Tennessee. Just watch - then I'll be taken hostage by some right-wing militia in Ohio.
By paulfesta at 2:10 PM

Hi Paul -- thank goodness you're still doing a little Facebook -- I found PFPGA that way! I am loving getting your window on a residency in Paris, which is unbelievably exotic to me. And loving your pictures. If you please, grab a shot of the wig and manicure street. I want to see! Love to you -- Amy from SF ("Steph and Dave" Amy)

Hi Amy! Great to hear from you and fun to be Facebook-connected. Very good idea for the photo - lemme see what I can do for you. You're in LA, right? If you're in SF in May or June, let me know, it would be great to see you.

Even more south of LA now; just above San Diego. I'm trying to swing a trip home soon. I'll of course be doing the rounds so I know I'll hear if we're there at the same time. I'd love to see you.