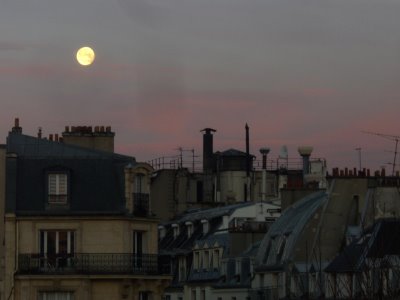 Paris to the moon indeed

Today I finished my fifth day and 30th hour of work on the novel since arriving in Paris, also my fifth contribution to La Creation du Monde / 90 Variations. I'm deeply concerned because I am enjoying my work so much. This is not normal behavior, especially for a novelist. I remember arriving at Jentel in June of 2007 and sliding hard into a nasty weeklong depression. Totaling my car against a 250-lb. animal en route probably had something to do with it, but mostly it was the work. I'm helpless, at the end of a day that started at 4:30, to come up with a metaphor that captures what it's like to try to master the chaos of a project like this that's six and a half years in the making - how about artificially inseminating greased pigs? No, that's no good - you want them greased. In any case it's necessarily a mess and this is no exception but I'm just enjoying the clean-up. I'm anal compulsive, I have organizational skills and I'm using them to turn big piles of paper and word docs into one single tidy chronological and labeled document. I don't feel panicked or even hurried despite looking forward to being able to just read this thing, stare at it and the second draft and the third-draft fragment for a few weeks, amplify the notes here and cut there, really get it under my skin before sitting down with 4x6 cards and translating what I've absorbed into an outline for the rest of the third draft. It's bizarrely comforting and pleasurable to go to work and know what you're supposed to be doing. I must be doing it wrong.

I seriously think I'm doing it wrong - how else could my characters be showering me with gifts so generously? Aren't they supposed to sit there in a corner, jaundiced with the end-stages of terminal social anxiety disorder? Today Christopher Mirabilis presented me with an aphorism - an aphorism! He's averaged about one a year over the life of this project and none of them were nearly this good. It feels terribly unlucky to write this down - tomorrow I will have writer's block.

But if that happens I can do what I did this morning during my breakfast break, which was to take pictures out the window of the moon as it set over the 10th: 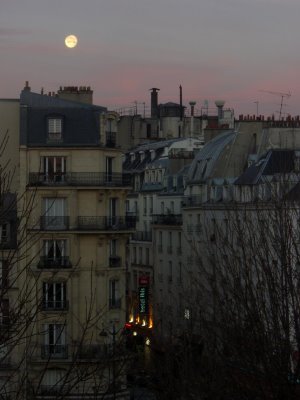 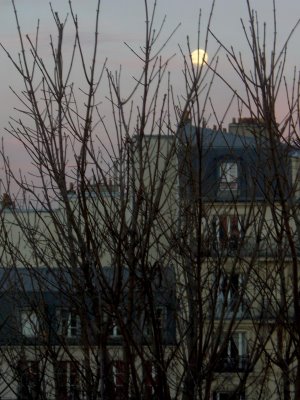