It was such a nice reward Monday morning after predawn work to watch that big moon set that I was primed for a repeat performance yesterday, and disappointed when it didn’t materialize – the dawn was rainy and overcast. As I was looking west for even a glimmer of moonlight behind the clouds, I saw that the sunrise was staining the 10th a slightly radioactive peach, and started taking pictures. 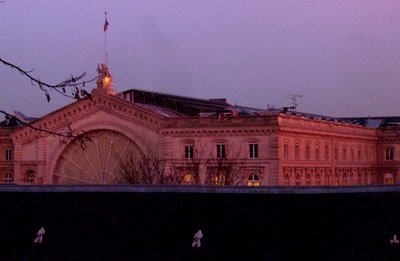 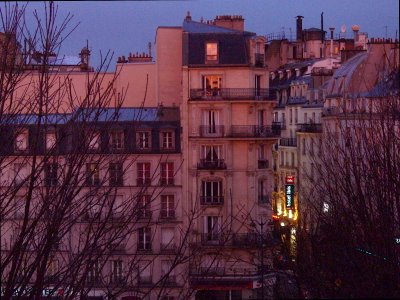 Then I noticed was that there was an unbroken rainbow arcing over Paris from the National Archives to the Port de la Chappelle. I couldn’t capture the whole arc and the only picture that came out shows just the southern base of it rising from behind rooftops and chimneys across Rue des Récollects: 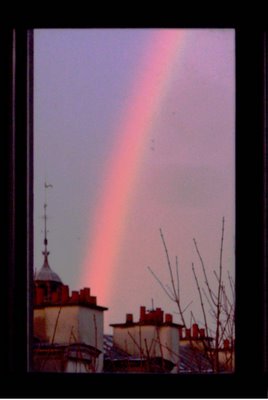 I had to cut the morning’s work short in order to pick up my stipend at this big government building by the observatory, way out in the 5th. I’ve been in Paris probably a half dozen times in my life including this trip, for a total of the same number of weeks, so while I’m increasingly comfortable finding my way around (especially after renting a bike the last time, in the summer of 2007, and never riding the Metro), huge swaths of the city remain terra incognita. One of these is out by the observatory, and yet as I ran (late) across Montparnasse Boulevard toward the Port Royal RER station, I had the most powerful sense of déjà vu. 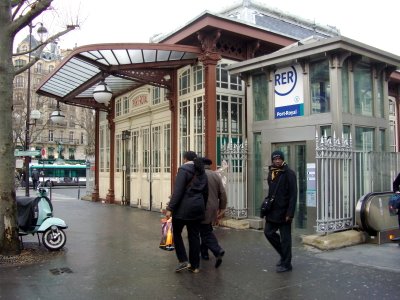 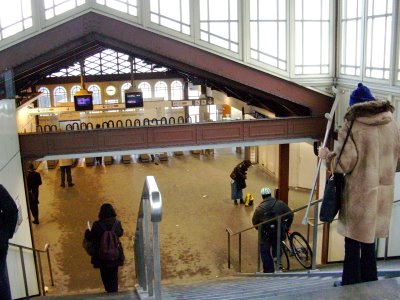 to take the RER out to the house under construction in the burbs where he rescues the kid and everyone gets shot. Rififi (Du Rifif Chez Les Hommes is the original French title) is one of my four or five favorite movies. So the morning had three things to recommend it: rainbow. Rififi. Stipend.

I set about spending the stipend immediately, walking through the Latin Quarter past the Luxembourg Gardens to find perfect prop after perfect prop (all of Paris is on sale right now) for Creation du Monde. Among the things I love about this project, it has turned Paris into a treasure hunt. I wanted these champagne flutes to be a surprise for James but I just cannot resist gloating over them: 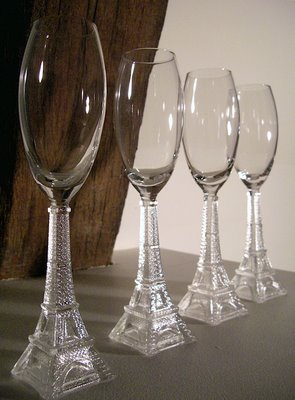 Just when you think Paris can't get any more beautiful...

I would write more about the Brazil-ian experience of visiting C.R.O.U.S. to pick up my stipend, and associated thoughts, watching various students in head scarves collecting substantial wads of euros, about how Joe the Plummer just has not succeeded in getting through to these silly French people, because they are very assiduously sharing their wealth – with the likes of me, no less – even as there is less and less of it to go around. Socialists! But today is supposed to be my day off, which I’m allowing myself even though I didn’t quite finish my writing day yesterday and didn’t manage to sit down with my French lessons…being here is its own language class, of course, and I now know how to say that the electric stove keeps blowing the fuses.

Before I quit I just want to express my concern for the people behind the Pacino Rififi remake, which I've only just this minute heard about. Are they fucking crazy? Is the idea to improve on that film? New retail goal - an old copy of the Auguste de Breton novel. If anything will get me to study French on a daily basis, that's it.
By paulfesta at 9:04 PM