After my first day of actual writing, too tired to string two sentences together, I glue them together with pictures. 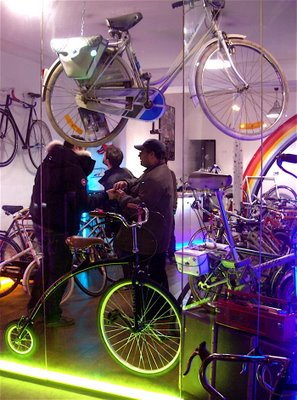 Day before yesterday I got my busted bike back from 18 Vélo Vintage, 58 Rue du Ruisseau in Montmartre. 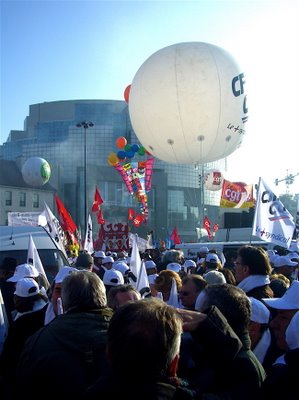 Paris to Sarko: Up yours! Yesterday (Thursday) the entire Bastille and every thoroughfare leading in and out was jammed. You couldn't move, the smell of cooking meat was everywhere - it was like Folsom St. Fair but in winter and with no sex. I lasted 15 minutes. 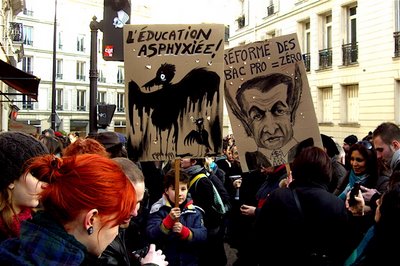 I get a little shiver of frisson when I decipher a French pun. Everywhere people sported signs that read "REVE GENERAL," playing on the rhyme between "reve" (dream) and "grève" (strike). 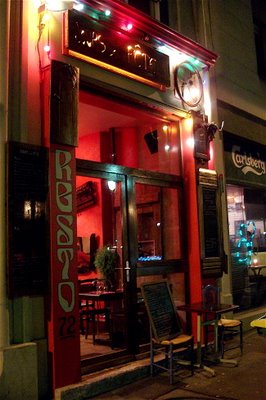 After the strike demo I met inauguration buddy Irène for dinner at Jours de Fête, 72 Quai de Jemmapes, right across the canal from me. Her buddies run the joint - a couple, she English, he French; conversation was in French about a quarter of the night and I limped along admirably. Food was first-rate - Irène and I both cleaned our confit duck to the bone. 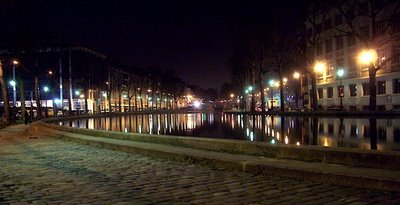 The view northeast back on my side of the canal. 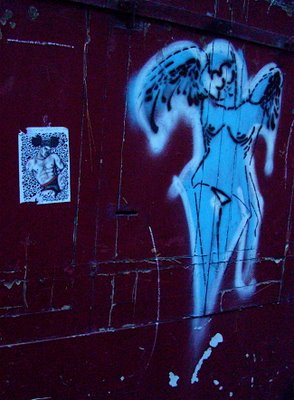 Twink & Tinkerbell in the Marais. 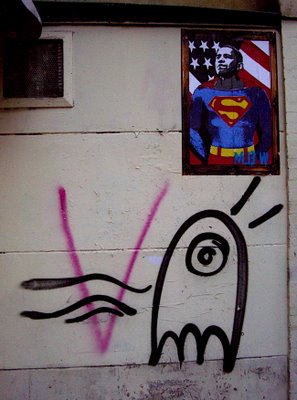 Expectations? What expectations? The other day, I bought five avocados for three euros - that's better than Trader Joe's - from a vendor in the 17th, near where I met the judge for a conversation date. When the grocer learned I was from the US, and that we shared opinions of the current and former president, he slipped a handful of clementines into my bag. 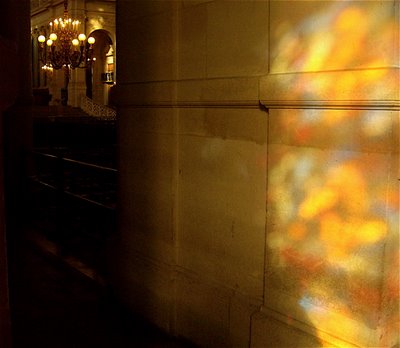 Really fun errand at Messiaen's church today - I have more fun in church than any atheist I've ever met except Albert Fuller and that's a special case. The 3PM light through the stained glass did this to the stone. 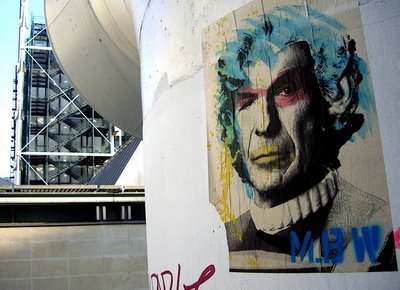 Walking through the Beaubourg I picked up this earworm and for once got Messiaen out of my head:

"If you try to knock me you'll get mocked
I'll stir fry you in my wok
Your knees'll start shaking and your fingers pop
Like a pinch on the neck of Mr. Spock" 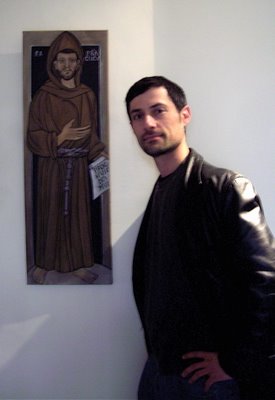 I come from San Francisco, I live in a Franciscan monastery, and here I am hanging out with St. Francis at the sacristy of La Trinité - for 60 years the musical and spiritual home of St. François d'Assise composer-librettist Messiaen.

Now that I'm all warmed up from writing captions I feel like I could add something more substantial before my forehead hits the keyboard. I found a super extra darling cafe by the Beaubourg, certainly famous as it's that cute and right in the middle of things and has been there, according to what's painted on the mirror, since 1892 - Le Petit Marcel. I paid an outrageous sum for a cafe au lait and then got my money's worth out of it with my first 90 minutes' work using the newly printed (merci EL!) outline, notes and 2nd draft. I began and finished a scene the outline told me I was supposed to write, using notes that told me what was supposed to go in it; I took the results home and spent another 90 minutes entering it into the third draft on the computer. When I was scribbling the scene down at the cafe it seemed stillborn, but entering it into the 3rd draft it showed signs of life. Re-reading it now I'm not entirely convinced but I'm encouraged nonetheless and really happy to have gotten the lats three weeks of admin and planning and printing and the now, today, the first writing out of the way. Tomorrow's post-gay agenda: brunch, three parties, a tattered 19th century Russian novel, and a letter to my mom.
By paulfesta at 2:56 PM