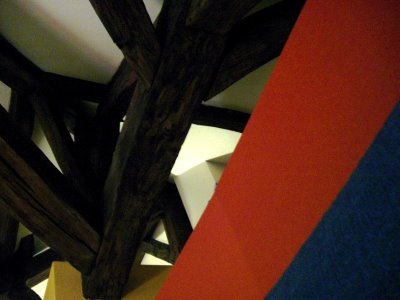 Terrible morning of noise next door; evening exalted by news of neighbors’ imminent departure. In between, 20-minute bike ride to restaurant Oresto out in the 17th for a date with a guy I met online to trade English and French conversation, a half hour of each. He’s a judge (!), younger than I, and was the perfect conversation partner in that he justly kept us to our allotted time, didn’t hesitate to correct me, didn’t chafe at being corrected, and was awfully nice to look at. If I have a date like that or go through a chapter of my French text every day I’ll be ready to take the AP exam by the time I leave for Israel.

I got through my six hours of work on the novel, quickly dispatching a stack of papers that turned out to be mostly diary entries from my last trip to Paris in the summer of 2007. Poignant: long letter to Albert Fuller – was it a draft? He died two months later. So many little non-novel finds I’ll have to find time to transcribe – these looseleaf pages are not getting on another plane with me. Here’s one small treasure for any art-makers in the audience – passages from Calvin Tompkins’ New Yorker profile “Shadow Player – the Provocations of Paul Chan”:

I realized that what I had to do was impoverish the image. I had to give up all the things that I thought were my strengths – the vibrant color, the brutal clarity of line…the sort of depth I got by almost putting the foreground and the background together. If you’re willing to impoverish, you can go on to something else.

Can you free it from what it is, to become what it can be?

My mind was cleared for something else to happen, which I think is what art does. If you do it right, that’s what happens.

If I read that passage every night before I go to bed, and watch a segment from The Mystery of Picasso, I will have the courage to edit my novel. But I refuse to impoverish La Creation du Monde - that is my Grand Marnier souffle with vanilla creme anglaise and mixed berry coulis garnished with mint leaves. Google isn't letting me get into the HTML so the dessert will at least be impoverished of diacritical marks.

The image above is my view from the couch that separates my bed, with its view of the Hotel St. Martin, and my writing desk, with its view toward the Rue Faubourg St. Martin. I would like an architect or maybe even a structural engineer to explain what we're looking at. Am I to believe that the helter skelter knot of ancient toothpicks is holding this place up?
By paulfesta at 1:28 PM