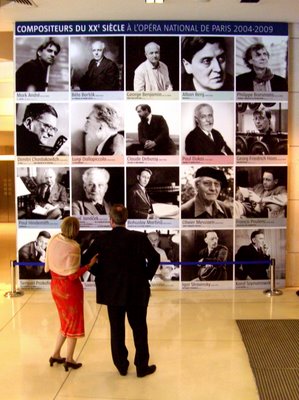 You're actually allowed to take non-flash pictures at the Paris Opera, but I saved my camera for intermission

I started yesterday’s writing session with three hours of darkness left to the morning, and was happy in the second hour to stumble on an idea for a radical plot twist at the end of the novel. It's an outrageous cliché to compare this experience to angling, and not for no reason - there's the tug on the line, the realization, not instantaneous but very fast, that you’ve snagged a big one, then the racing heart, the leap to action, the panicky thrill in knowing that your skill in the next minutes will determine whether you end the day with glory and a feast or a broken strand of monofilament. I typed as fast as my fingers would move to get the idea down, racing to keep up with implications and variations, and I didn’t slow down until the scene – a funeral oration and burial – became so vivid that I had to divert some energy in order to observe it, to acknowledge the real orations and burials that overlay this one like transparencies but also to recognize the superiority of this one to all the others, the excellence and fearlessness with which these characters had just proved themselves capable of grieving. As the mother’s role in all this revealed itself, the pathos of the whole thing began to register with an actually frightening velocity until the pressure on my sinuses couldn’t be contained and I did something I have never done in thirty years of writing — I burst into tears.

One option after an experience like this is to pop a bottle of champagne and call it a day, but as the sun wouldn’t be up for another two hours and I have no alcohol of any kind in the studio, this was impractical. So I kept working, going over the scene, filling it out, playing with the contours of the oration, and finally coming to the conclusion that a scene this elemental must have been written already by a great and famous writer and I was destined to be laughed at for an act of naked plagiarism. The sun rose, I ate Weetabix. I fed novel notes to the recycling box under my desk, took care of some errands online, worked on La Création du Monde, put in another couple of hours on the novel. At a certain point I realized I hadn’t left the studio all day, so I took a walk around the public garden behind the monastery and snapped a few pictures, came back up here in time for a quick dinner – eggplant tajine, slightly burned - before hopping on my bike to meet friends at the Bastille Opera House for opening night of Lady Macbeth de Mzensk.

Midway to the Bastille, I heard what sounded like a rubber bullet being fired near my feet – some combination of shwing! and thpwawt! – and sure enough, that tumor that had materialized on my rear tire on the ride from Oresto was gone and I was riding on my rim. So I locked up the bike, hoofed it the rest of the way to the opera house and met up with my friends Frank Browning and his lover. That’s using the term “friends” somewhat loosely, or at least prospectively, since before reconnoitering at the box office I hadn’t met these guys except through email introduction and through my having read Frank’s book The Culture of Desire: Paradox and Perversity in Gay Lives Today when it came out 15 years ago.

Lady Macbeth, of which I’ve never seen or heard one iota despite being a Shostakovich fan, was absolutely amazing. The music veered into Wagner and occasionally Weill but always came back to snap that signature Shostakovich rat trap of trombones and squealing woodwinds around your heart – thrilling, thrilling music! The drama was squalid, and the music matched it, more than earning the opera its immortal epithet from the New York Sun - “pornophony.” Parts of it actually put Messiaen to shame in terms of music that just sounds like fucking. Lots of bare boobs bouncing around onstage on the fluorescent-lit minimalist stage. Spoiler alert for anyone who might see this production (Netherlands Opera): at the point when Katerina’s guilt starts to cost her sleep, the dead, clad in brown body stockings, start walking in slow motion up the walls on either side of the stage. As far as I’m concerned, whoever came up with that bit of stagecraft (Martin Kusej?) one-upped Shakespeare. When I realized what I was seeing (the lighting made it pretty subtle) my whole body broke out in goosebumps – my jaw literally dropped – and I would have burst into tears of aesthetic bliss if I had not already gotten that out of my system earlier in the day.

Through all four hours of four acts, several interludes, and a long intermission, I was preoccupied by the thought of how the audience – which filled every seat of the house, with hordes of Parisians turned away at the box office – was going to reward soprano Eva-Maria Westbroek for the heroic and superhuman performance she was delivering. The answer turned out to be probably the loudest, longest and most satisfying roar I have ever heard in a theater. Many hundreds of people shouted and hollered for this woman and it sounded like thousands – it was, despite fierce competition, the most exciting choral singing of the night. If Westbroek isn’t the toast of the town for the run of the opera, there is no champagne in Paris.

Today was a bit more subdued and I didn't cry once. I met my Welsh friend Lucian – he spends part of his time in San Francisco – on Rue Montorgueil, where we shopped for brunch (the whole thing is one of Paris’s best open-air markets, especially on a Sunday) and then ate back at his place. Amazing food – what do we do to our eggs in the US? Have we invented a special technology to remove their color and flavor? Lucian and I opted for the bakery with the ten-person queue, and as a result ate the second-best almond croissants I’ve ever had (the grand prize goes to the time I got them right out of the oven at Delessio’s on Market Street in San Francisco), one of the best baguettes and a very good fougasse (better: the old Phoenix Bakery which used to be in Hopland and then moved to Willits before vanishing, as Phoenixes will). I cracked up the cheesemongers when I asked the difference between mouton and brebis. Americans are so cute.
By paulfesta at 1:46 PM

I discovered three secrets for making delicious eggs when I lived at 81st and Lex in NY in the early 80s:

1. fresh eggs, ideally, gathered the morning you eat them
2. cook with lots of good butter
3. eat them at the little "Luncheonette" on the SW corner of 85th and Lex, served at the counter by old Greek guys wearing neckties and white aprons, or, if you eat in one of the ancient booths, by a middle-aged woman named Chris from Queens, who'd been working there for over 20 years. The Luncheonette may be gone now, but fresh eggs cooked with lots of good butter still apply.